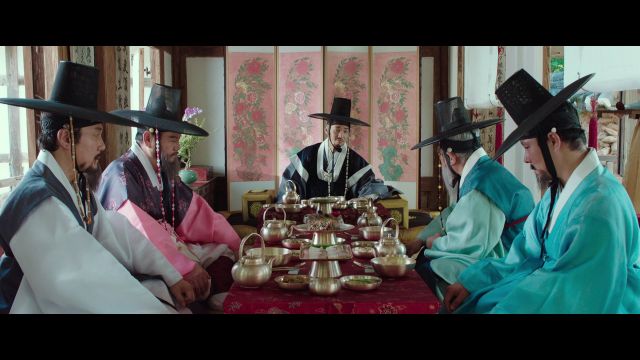 Normally when I write that a movie or drama makes a mockery of history I mean that it does so by portraying events in an exceptionally stupid and implausible way. "Behead the King" mocks history rather differently- most of the story is quite plausible, it's just shockingly crude. Say, a teenage king laughing at farts. Or common people engaging in a professional wrestling style farce. Or nobles passing morality laws while they themselves engage in lewd and indecent sexual acts.

Beneath the low-brow surface of "Behead the King" is some surprisingly apt political commentary- this is one of the few political dramas in recent memory to acknowledge that one of the central defining features of government is bureaucracy. Which is to say, even absent explicit direct action by the people in power, most effective bureaucracies are perfectly capable of running themselves. Hence why King Seongjong (played by Kang Yoon) is able to spend so much time having sexy parties.

The lower classes, to their credit, amuse themselves in mostly the same way. What inspires Bi-seol (played by Kang Yeon-jeong) to undertake an elaborate act of revenge is a new government initiative to promote morality by encouraging state-sanctioned violence. No this does not make sense although that's sort of the point. The government officials in "Behead the King" have obviously not thought through the ramifications of their plans mostly because there's no way for the outcomes to affect them.

Bi-seol, by contrast, puts a great deal of thought into how she plans to humiliate the noble classes but almost none into the inevitable outcomes of her actions. That's because Bi-seol knows that she is going to die. That's kind of the inevitable outcome of picking a serious fight with an organization that's backed by the power of a literal army, even when Bi-seol's plan consists of little more than horribly crude slander. The upper classes can dish it out, but they definitely can't take it.

Does this sound familiar to you? Because as modern political allegory it really should. The Park Geun-hye undertones are obvious- at one point an explicit point is made of how absurd it is to assume that a woman in a position of power will act in such a way as to promote the welfare of women everywhere simply by virtue of being a woman. There's also the more universalist irony in how politicians who claim to act for the people do their best to ignore them any time the little folk are impudent enough to state an opinion.

Director Kim Jae-soo's take on history is revisionist to say the least, suggesting that King Seongjong's reputation as a great King was ultimately do more to his willingness to empathize with the little folk rather than his just being an inherently brilliant guy. Still, as the historical subtitles remind us, "Behead the King" is based on real people and events. The interpretation of those records is no less far-fetched than, say, the plot of "Masquerade", even if "Behead the King" has a decidedly less dignified countenance toward its forefathers.