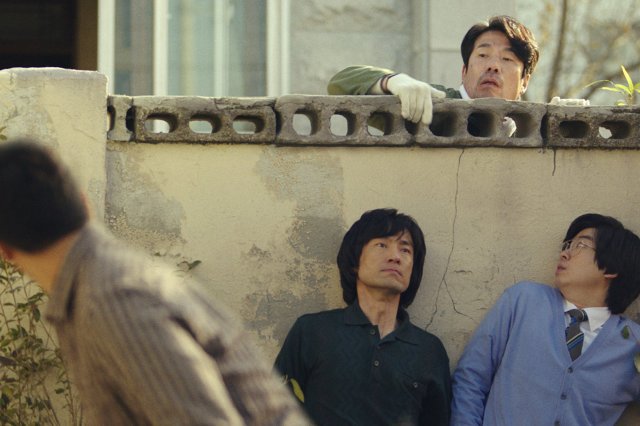 Eui-sik (played by Oh Dal-soo), an obvious parallel for real-life president Kim Dae Jung, arrives at the airport during eighties South Korea. The activist is then immediately put under house arrest, despite not being accused of any actual crimes. Focus then promptly shifts to Dae-kwon (played by Jung Woo), the National Intelligence Service agent charged with wiretapping Eui-sik's home. Dae-kwon's situation quickly turns to farce, as it is obvious Eui-sik knows he is being surveiled, but the dimwitted agents desperately try pretend otherwise.

The first half of "Best Friend" is definitely the strongest as director Lee Hwan-yeong treats us to the absurdity of the situation. At one point a character is forced to retreat into the nether regions of an outhouse to recover a lost tracking device. Desperate attempts are made to decipher possibly nonexistent codes that might be communicated to Eui-sik via song. And in two wonderful setpieces, home invasions necessitate the use of convoluted and implausible explanations to maintain the illusion that Dae-kwon and his fellows aren't spooks.

But outside of these broad strokes "Best Friend" is less effective. The movie's a bit of a dinosaur, in multiple ways. The abrupt tonal shift in the second half calls to mind early Korean wave films from the turn of the century. In more political terms, "Best Friend" is borne of the same general optimism of South Korean culture circa 2017. Much like "1987: When the Day Comes" there's a feeling that yes, the dictatorship may be brutal, yet an earnest desire for freedom will prevail above all else.

It's not a sentiment that has aged well. In a darkly twisted turn, the movie's own delayed release is evidence of that. The movie's original ddistribution window was wrecked when Oh Dal-soo was outed as a serial groper. Evidently his turn as a noble figure in "Best Friend" did not allow Oh Dal-soo to see the error of his ways. And yet we're expected to believe that Dae-kwon, an agent for the South Korean dictatorship, is inevitably inspired to take a buffoonish stand against tyranny by his interactions with Eui-sik.

The balance between whimsy and serious drama is not effectively done, despite having its moments. I liked how, for the sake of further plausible deniability, Dae-kwon does not communicate especially well with his superiors. There's obvious irony in how, despite claiming to be the good guys, the National Intelligence Service insists on being secretive about everything. The only time their intentions are clearly parsable is when they're making threats.

Yet none of this should be surprising to Dae-kwon, who both needed a better reason to turn against his spy masters, as well as more plausible justifications to explain why his superiors didn't lock him up in a torture prison too. Or at least fire him from his job. With three credited screenwriters it's not surprising the message is so muddled, and the story itself much more long-winded than it needed to be. Still, "Best Friend" is funny when it counts- which is worth something at least.