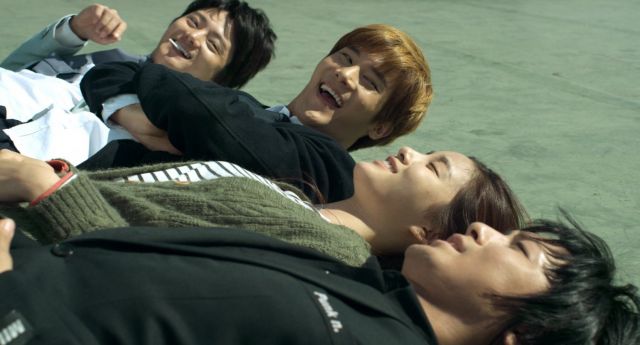 While no high school student has an especially strong positive attitude toward school the students in "Black Idols" have it particularly rough. Their campus literally appears to be falling apart. It also metaphorically appears to be falling apart, in that students frequently openly disrespect teachers. Alas, the title is a bit misleading. There are no idols in "Black Idols". In actuality this is just the story of how Lee Hyuk became a teacher at this school and taught the students about music.

Unfortunately that description is also misleading, because it might fool you into thinking that "Black Idols" is some sort of inspirational story about how a fine arts education encouraged students from a rough walk of life to feel better about themselves. There's no happy ending. The framing device for "Black Idols" is actually a police investigation, so we know that by the end of the flashbacks something terrible is going to happen, even if we're not completely sure what.

Having seen the movie I'm still not completely sure what happened. The sequence of events is pretty clearly laid out- that much isn't a problem. But I have no idea what to make of the gruesome terms that make up the final act partially because the main villain's motivation appears to be just a generic hatred of music. As obviously cartoonish as that probably sounds, there's nothing cartoonish about the ending which is rather disturbing and depressing.

But even on this end "Black Idols" fails itself in terms of storytelling. The conflict is so poorly laid out that most of the bad stuff that happens just comes off like a freak accident of nature. There's also the matter of the characters being kind of dumb. They're being high school students this isn't actually that big a deal. The problem is that just because a story is technically logical doesn't necessarily mean it's any fun to watch.

Even if the story's not supposed to be fun, when I think back to all the individual student characters there's little in the way of clear differentiation. There's one who likes cameras, a transfer student, several who start fights, bullies...all right, to be honest outside of the guy who likes cameras and the transfer student I had difficulty telling most of these kids apart. Lee Hyuk is distinctive, but somewhat surprisingly he's not actually as big a part of the movie as one might expect. He never even really teaches them about music. The extracurricular group just sorts of absorbs his knowledge via osmosis.

I suppose that given the movie is technically about music I should discuss the soundtrack. It's all right. The score isn't going to rock anybody's world but it's easy enough listening. But in terms of film "Black Idols" is an undisputed failure. On a basic level I'm just not sure what the point of this movie was supposed to be. At times it's uplifting, cute, or scary, but these tones just don't go that well together and I wish that writer / director Song Dong-yoon had just stuck with one idea instead of trying to be clever. "Black Idols" just isn't worth seeking out.