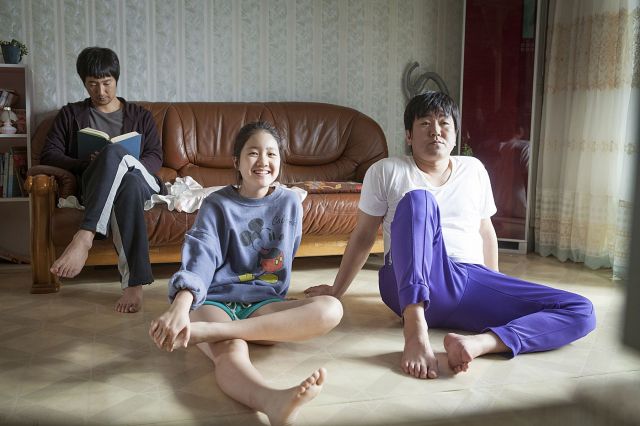 When director In-Mo (played by Park Hae-il) finds himself at the end of his professional rope, he reluctantly finds himself beckoned toward home. There he awkwardly accepts the kindness of his ever-patient mother (played by Youn Yuh-jung). His older brother Han-Mo (played by Yoon Je-moon) and younger sister Mi-Yeon (played by Jin Ji-hee) have barely grown up themselves, even though all of them are now well into middle age.

At its best, "Boomerang Family" depicts the rather sad realization that family dynamics never really change. Han-Mo would seem like an ill-suited older brother, given that he lives at home and has a big, lazy pot belly, but he still bullies his younger brother around and acts as if he's responsible for his siblings' well-being. Though Mi-Yeon is now a mother herself, her judgment seems questionable and often in need of help from her older siblings. And In-Mo, in spite of his best efforts, constantly finds himself thrown into familial quabbles as the straight man. Their mother is, naturally, ever-patient and ever-understanding.

These are all very interesting dynamics to explore, but for a movie to really work, it needs to have a strong storyline. And this is where "Boomerang Family" stumbles. I counted over half a dozen narratives that could be described reasonably well as being a plot. But none of them are really explored. Characters are introduced who seem like they should have a strong relationship with the existing family members, but are never really explored in any serious detail, though they do factor importantly in the movie's ending.

Ironically, the ending is actually fairly well-done- the problem is that it has almost nothing to do with anything the characters have actually been doing up until that point. Multiple subplots are romantic, and these are resolved appropriately in the ending. But these love stories are so laughably underdeveloped that these resolutions just come off as awkward. Indeed, one couple doesn't actually have any screen time together at all until the ending. The fact that these people even know each other is only ever referenced secondhand.

It's not just the plotting that's awkward. Some plot developments conflict horribly with the overall tone. A gangster storyline crops up in the second half of the movie that feels horribly out of place and grisly- especially since the only reference to this subplot in the ending is that one character's leg is stuck in a brace. It's not at all clear to me why the movie's narrative is set up the way it is- if there had only been half as many subplots they could have been resolved in a much more satisfactory way.

In terms of acting, camerawork, and comedy, this is only ever an average movie to begin with, and there's not much to write about. So the poorly-done plot only sticks out all the more painfully. This movie has about the same value as the films In-Mo produces- a funny revelation, when we finally to get to it. But one that really needed better build up to deliver a genuine laugh.