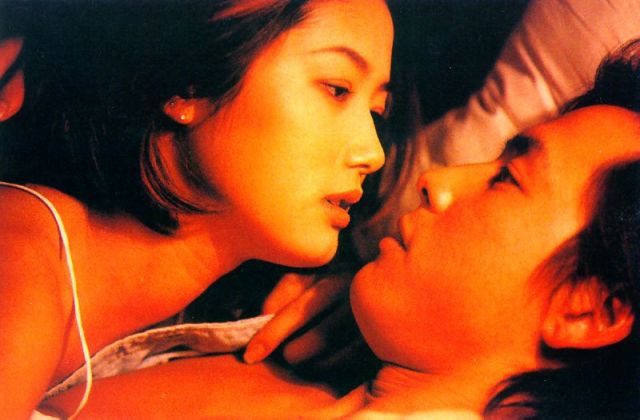 Kil (played by Jung Woo-sung) is an assassin. Why, I suppose you could even say he was..."Born To Kill". Yes, that is an obviously corny and dumb joke. Well, get used to it. In short order we watch Kil carry out multiple murders. Very stabby murders, where Kil comes off less like a person and more like some sort of hybrid land-shark who's drawn to blood, water, and people who insist on horsing around in spite of the obvious rules against such rude behavior. Also he has a pet monkey.

I need to note that, as comical and extreme as the plot sounds when I describe any of it systematically, the production as a whole is just so deadly serious. Director Jang Hyeon-soo made a very concerted effort here at classy gangster exploitation. There's the long, deliberate shots, the clearly delineated visceral violence, the pseudo classical musical chords- all of this is a very blatant evocation of nineties action flicks, when new advances in camera and synthesizer technology made possible all sorts of filming tricks that probably seemed a lot less ridiculous at the time.

To put it more succintly, "Born To Kill" is classic high camp. Someone deliberatelty trying to make a cheesy action flick today couldn't possibly come up with something this absurd, because the production team really had no idea what they were doing. I mean, in all fairness, the movie looks pretty good. I loved the camerawork in the chase scene, with all the guys hanging their heads out the windows, planks outstretched as they swerve through traffic.

It's the context that makes the whole thing so ridiculous. While "Born To Kill" always looks like classic nineties Seoul, the intrusion of a gangster movie into such random locations as subways, beaches, and nightclubs only underscores how implausible the entire set-up is. Every bit of beautifully violent and mostly pointless destruction is just the result of a rampaging mob that exists mostly to set up more action scenes.

The acting too, does a lot to sell the sheer sincerity of the product. Shim Eun-ha factors in as the love interest- a woman who pointlessly flirts rather aggressively with the socially awkward leading man. These scenes, too, seem like a farce of a romantic relationship, designed mostly to give the actors some sort of motivation. Unfortunately any attempt at a plausible illusion is mostly broken by the goofy overwrought music and situations- all of which are designed with creative style in mind rather than naturalistic storytelling.

The main thing making "Born To Kill" different from an auteur flick like, say "Gangnam Blues" is that there's no real pretension at a greater societal or emotional message. Director Jang Hyeon-soo really did just want to make a fun, generic assassin movie and was fine with using whatever random clichés were lying around to pull it off. Personally, I think there's always a place for minimally functional storytelling.

"Born To Kill" won't top anyone's list as a genuinely enjoyable movie. The narrative is unambitious, the characters mostly archetypes, and the ending is unfortunately just serious enough to prevent the whole film from turning into a complete joke. But for those willing to not take movies so seriously and just enjoy the spectacle, "Born To Kill" really is a lot of fun.