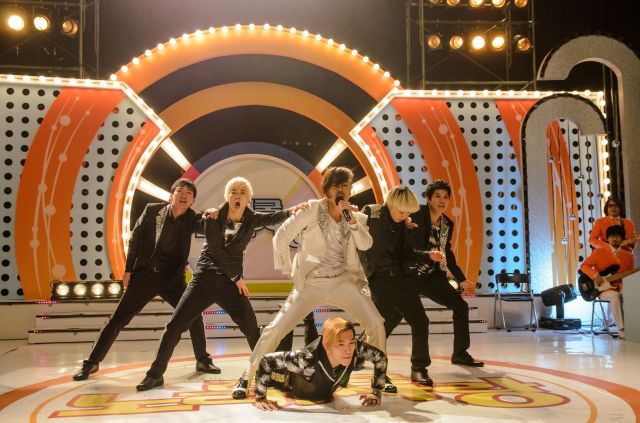 Many colorful characters finds themselves involved with a famed Korean musical contest program. There's a slovenly, unkempt man attempting to get a hairdressing license, a crabby working woman in her sixties. An extremely shy and timid young woman, and an elderly grandfather living with his granddaughter. These characters have little to do with each other- but which will attain their dreams?

Well, it's a misleading way to frame the movie, to be honest. Yes, "Born to Sing" is, in fact, about a singing contest. It's the central plot device that defines all of its characters. But contrary to what one might expect, winning the contest is not actually the goal everyone is striving for here. Indeed, only two of the characters mentioned above have any kind of real singing talent- I have a tin ear and even I could figure out that much.

Rather, what defines the characters of "Born to Sing" is their sheer, simple humanity. I was extremely surprised to find, after an astonishingly gross and crude opening scene, that Bong-Nam, the boorish hairdresser played by Kim In-kwon, is a surprisingly warm and affectionate husband who even in the worst of times cares deeply about his wife. Kim In-kwon does a great job getting across how, ugly though his character may be on the outside, a woman would be very lucky to find a man is as warm, affectionate, and caring as he is.

Another noteworthy performance is Lee Cho-hee's turn as Hyeon-Ja, a shy socially awkward office worker with a bad crush. What I really liked about Lee Cho-hee here is how subtle her romantic aspirations. Oftentimes whenever I see a guy on-screen fail to notice a girl, I just want to smack him upside the head and yell "notice it already, idiot!". But Hyeon-Ja is so shy, so socially stunted, that it's easy to see how her love interest is oblivious to her affections for most of the movie. It's really just not that different from her normal bashfulness- although we in the audience obviously know better.

Because "Born to Sing" is telling several basically archetypcal stories, none of the plotlines goes into serious depth. What really surprised me was just how much I liked all the characters. They have their quirks and their flaws- but everyone's genuinely doing their best to work through them. They're good sports, and while there's a bit of drama and people get hurt emotionally, no one overreacts and the movie's emotional spectrum is, for the most part, firmly planted in the same reality as most mentally healthy people. It's a feel-good movie in the best sense of the term- a reminder that most of our problems are pretty small and can be dealt with if we only have enough courage.

The music is good. Not great, but then, it's really not the focus, which is how Korean musical contest culture affects people's daily lives. Take note, though, that most of the music in this movie is the kind of stuff you only hear while inside Korea- it's not the K-Pop staples that have become a brand worldwide. In this way, "Born to Sing" is also surprisingly authentic. While there's a lot of stuff here that only a Korean will truly get, for this reason it's a better window into everyday Korean life than what's typical in more internationally-minded films.