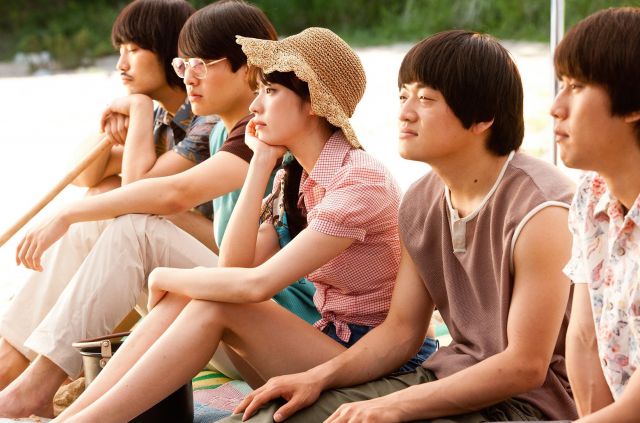 The time is the sixties. The place- a hip sixties bar by the name of "C'est Si Bon". Hyeong-joo (played by Kang Ha-neul) and Chang-sik (played by Jo Bok-rae) are two talented young musicians who seem to genuinely despise each other. Enter Geun-tae (played by Jung Woo), a somewhat less talented man who the other characters hope will even Hyeong-joo and Chang-sik out. It doesn't work. Ultimately these three are only able to form a functional folk band because of Ja-yeong (played by Han Hyo-joo). She doesn't join the band or anything. It's just, you know, Han Hyo-joo. She's pretty hot.

"C'est Si Bon" mostly avoids any particularly weighty material to focus instead on atmosphere. What was the folk music scene like back in the good old days, back when everyone was wearing cool retro fashion? Well, not as exciting as you'd think actually. Hyeong-joo and Chang-sik may be geniuses, but they're also just mortal men, so the focus on their social lives is quite appropriate. Contrary to popular belief, very few artists produce art for art's sake. Somebody has to pay the bills, and the cheers of the crowd can only go so far.

For awhile "C'est Si Bon" is a fairly pleasant viewing experience, mostly because it all just looks so pretty. I suspect that quite a bit of this movie was contrived for the sole purpose of having Han Hyo-joo show off attractive vintage fashion. And I suppose the romantic storyline centering around Ja-yeong, her ambitions, and those of the band are all reasonably entertaining. The entertainment here is a tad light, but definitely enjoyable.

The problems show up when we jump twenty years in the future. And there's really no nice way to say this- nearly everything that happens after the timeskip is completely pointless. I was expecting a short epilogue, but it ends up turning into a bloated storyline about stuff from a long time ago that's really hard to care about. The characters themselves straight up admit that there's no point to drudging up the past- so why did writer / director Kim Hyun-seok think all of this was important?

Well, to be fair, it's not a problem of "C'est Si Bon" in particular so much as it is a failure of the musical biopic in general. That's the main reason why "C'est Si Bon" works for as long as it does really- as long as Ja-yeong is the center of attention, the story avoids getting dogged down in its own pretensions. Even in-story this is the explicit reason why Ja-yeong is important in the first place. The popular music is nice background for a simple love story, but once we leave the sixties it just becomes a relic.

I can pretty easily recommend the entire first portion of "C'est Si Bon" with the younger cast. Once that much is over with, though, feel free to cut your losses and turn the movie off if you start getting bored, because after the timeskip it's all downhill. While "C'est Si Bon" certainly deserves some credit for being able to provide a pleasant sense of ambience, that much can only really take a film so far.