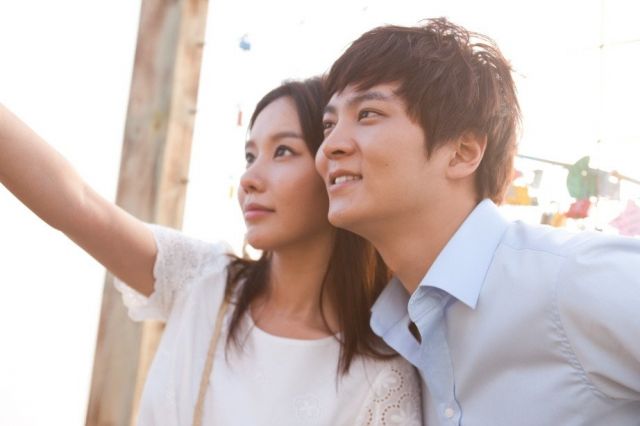 In "Bridal Mask", Joo Won played the role of a policeman secretly fighting against his own government for the sake of Korean nationalism. The drama is loaded with the ambiguities this situation brings up, and how the title character feels like trash for causing untold emotional suffering to his best friend. In "Catch Me", Joo Won plays the role of Ho-tae, a policeman secretly fighting against his own government because his ex-girlfriend's name comes up in the investigation and he wants to protect her because...uh...

Yeah, I'm not actually sure what the positive qualities are of Jin-sook (played by Kim Ah-joong). The woman's not evil or anything, yet still manages to cause pointless destruction and suffering almost everywhere she goes without even so much as offering a convincing apology. It's not at all clear why Ho-tae is willing to put personal morality and reputation on the line for her. Even in flashbacks she was the same terrible influence on him.

The movie's in a really weird spot, because it expects us to sympathize with Ho-tae and Jin-sook even though there's no particularly good reason to. Villains show up in the form of other police investigators who...are trying to do their jobs and capture Jin-sook. But I guess they're kind of mean so they must be bad? Whatever tone "Catch Me" is trying to pull off with its characterization, the movie is clearly failing to do so.

For what it's worth, "Catch Me" is pretty obviously not a moral treatise, but rather a romantic comedy. The romance kind of stinks, granted, but how about the comedy? That's more hit-and-miss. Several jokes, while relatively simple, do an excellent job connecting due to the skill involved in timing and delivery. This humor unfortunately has more to do with general comedic situations and broad narrative outlines than with anything in this particular story, but hey, I'll take a good laugh where I can get it.

On the flip side, a lot of the jokes fail to connect altogether. Much use is made of bad computer effects. This in itself could be a joke, except that we're clearly supposed to take the scenes at face value. There's no sense of parody here, so as a result the movie's more ambitious moments just come off as cheaply filmed and amateurish. There's also a horribly gauche display of racism at one point. For what it's worth, the racism isn't Korean in origin- the offensive relic in question is obviously an imported piece of Americana. That's still not much of a defense, though.

The simple fact of the matter is, "Catch Me" does not do anything well enough for it to really be worth giving the movie the benefit of the doubt anywhere. It lacks consistency. In Ho-tae's first scene he's cool and competent then for the rest of the movie he's a bumbling buffoon. The movie loses track of which of its comedic bits were supposed to be semi-realistic versus comedic artistic license. But worst of all, there's almost no catching! If the movie's called "Catch Me" I go in expecting lots of cool chase sequences where people actually chase each other- here we only get one and it's pretty lackluster. This project was a waste of the talent involved, and I do not recommend watching it.

"Catch Me" is directed by Lee Hyun-jong and features Kim Ah-joong and Joo Won.