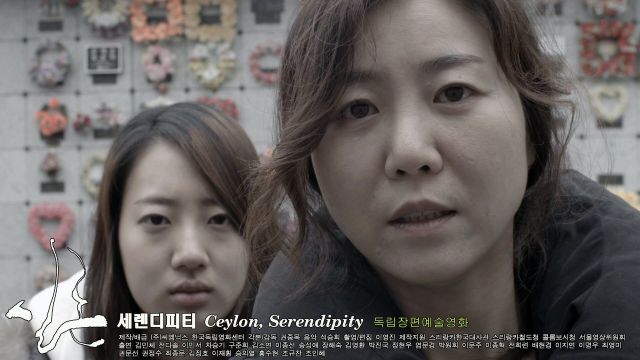 In the opening sequence of "Ceylon, Serendipity" the camera moves at a leisurely pace along the roads of Sri Lanka. The film closes out with the same extended shot from a somewhat different angle but no real new information. That's what the process of watching "Ceylon, Serendipity" is like. Even though we're at a slightly different place at the end of the movie than we were at the beginning, I'm still not sure how we got there, or why, or what reason there should be for anyone to care.

"Ceylon, Serendipity" appears to be some sort of Buddhist metaphor, if that's any help. It's really more of a layman's metaphor though- the characters are not strong Buddhists. Actually I can't recall whether it's ever explicitly stated that they're Buddhists at all. The whole Sri Lanka aspect of the story, the generally passive attitudes they take toward life, and the entire sermon that plays over the end credits are really the only indications that this is a Buddhist story.

The plot? Well, let's see...Min-che (played by Kim Min-che) is a stage actress. Nothing huge- just small plays that fill small auditoriums. The kind of cozy affairs you might see on college campuses, where telephone conversations play out with people in the same room. The imitation of family life seen in the play appears to be a mirror of Min-che's- or does it just seem like that? Could it be that theater just resembles life because it is life, rearranged and placed on the stage so as to be more easily appreciated, the real-life metaphors mostly a thing of accident?

That's the kind of philosophical question actor / director Kwon Joong-mok appears to be asking. Yes, he is cast as the lead in his own production, Min-che's second husband who just kind of...loafs around the house, occasionally having an awkward conversation with his stepdaughter (played by Jeon Da-sol). While not terribly interesting this does tend to be exactly the kind of thing real stepfathers do.

"Ceylon, Serendipity" is the kind of movie that fails to be a movie because it's too realistic. Presumably the intent here was to help the viewer reflect on their own lives, and how the inherent nothingness in our lives is an inescapable truth that can be escaped nowhere. Least of all in Sri Lanka, where aside from the lack of a good shave, the change in language, and the difference in landscape does not appear to meaningfully differ from life in South Korea.

"Ceylon, Serendipity" is also the kind of movie that really annoys me, because even though I found the movie rather boring any attempt I make to discuss the film makes the project sound much deeper and more intellectually profound than I remember the story being while I was actually watching it. Life, like the movies, goes on for awhile, and then it ends with as little fanfare as it started. What is death, when film and theater are but little more than a futile attempt to escape from life?