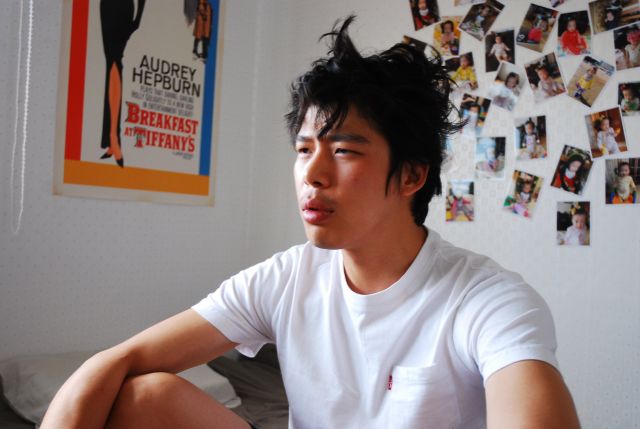 Lee Byeong-heon (played by Hong Wan-pyo) is a struggling filmmaker trying to break out of support roles and land a high credited job as director or screenwriter in a major film. As his dream is a romantic one, a documentary crew decides to follow him around to get a taste of the life of a young, ambitious, creative man. The work quickly takes a turn for the dour as there is nothing at all romantic about Mr. Lee. He isn't even particularly likable.

In "Cheer Up Mr. Lee", the main character embodies the spirit of a person who understands what film is on a basic level, and how it can be used to manipulate an audience. However, he knows absolutely nothing about context or keeping up appearances. At multiple points in this movie, Mr. Lee attempts to interact with other people in front of the camera to try and make himself fit into the romantic tropes the documentary crew was originally expecting to find. His efforts almost always end in failure, though, as the various people in his life will contradict him, either not knowing or not caring about Mr. Lee's hidden agenda.

The Korean entertainment industry is portrayed in a very professional, very boring light, with characters who look at situations in a much more down-to-earth way. Mr. Lee is presented with a clear road map to actually get his dreams realized, and consistently screws it up by failing to treat the situation as seriously as he should. His comically ineffective attempts at subterfuge are the only real serious efforts he's willing to make. In everything relating to his personal and professional life, there's this lazy, half-hearted attitude that tends to undercut his aspirations.

It all makes for a terribly amusing mockumentary. Mr. Lee genuinely believes that any exposure is good exposure- it's strongly implied that during an interval when the camera isn't covering his life, Mr. Lee changes his attitude solely to make the camera come back. He's a man whose romantic delusions about the world lead him to make observations that are far less clever than he thinks, in service of goals much less noble than he pretends.

The dark humor revolving around Mr. Lee and the people in his life is quite effective. It imbues a sadness into the film's optimistic tone that has a very effective discordance. The movie isn't always consistent with this, and some stretches linger a little without moving on to a more interesting point. However, "Cheer Up Mr. Lee"'s final section is such a beautiful parody of everything that Mr. Lee and his friends think they stand for, that it's well worth the final wait.

Director Lee Byeong-heon-I has the same name as the title character in this story. It's easy to see that he's taking pot shots at himself, and his own less-than-savory attitudes as he's worked throughout the film industry. It should come as little surprise that, though Mr. Lee the director actually worked on the famed Korean film "Sunny - 2010", Mr. Lee the character obviously doesn't get the film at all on any level aside from the most literally shallow. Mr. Lee may glitter with the aura of the film industry, but that's no guarantee he can talk about film in a way that makes a normal person care about his choices.

"Cheer Up Mr. Lee" is directed by Lee Byeong-heon-I and features Hong Wan-pyo.