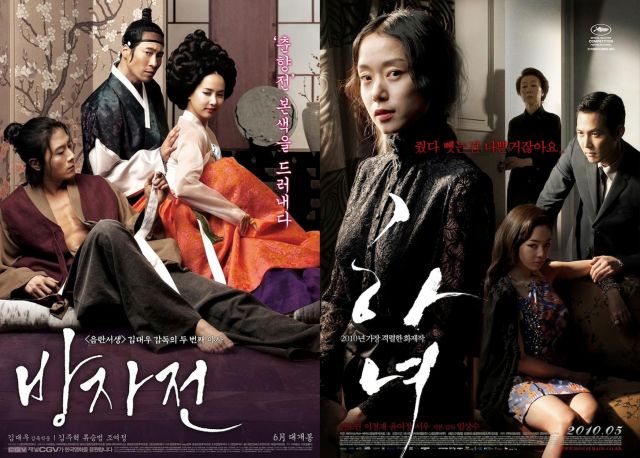 Two of the first films that caught my eye, in terms of their sexual content, were Im Sang-soo's 2010 remake of the "The Housemaid - 1960" and, even more so, Kim Dae-woo's "The Servant". The latter contains perhaps the most erotic scene I've seen in a Korean film. Well Im Sang-soo is back with another steamy drama in the form of "The Taste of Money" which was recently released and stars Kim Kang-woo, Baek Yoon-sik, Kim Hyo-jin, and veteran actress Youn Yuh-jung. The film has been invited to the 65th Cannes Film Festival and there has been a lot of buzz around the film here in Korea. Especially given the fact that it contains a steamy sex scene between Youn Yuh-jung and her much younger junior Kim Kang-woo.

Scene's from "The Emperor's Concubine", "The Scent", "A Muse", and "The Taste of Money"

In addition to "The Taste of Money", June will see the release of Kim Dae-seung's "The Emperor's Concubine". It's historical melodrama that stars Cho Yeo-jeong who was largely responsible for heating up the screen in the "The Servant". However, The sexual content of recent Korea films should not suggests that great story telling is being sacrifice in the name of sex and skin. Kim Dae-seung's latest is said to contain a sophisticated narrative that contains psychological depth as well as intriguing social commentaries on power and authority in Korea. As heart pounding as Cho Yeo-jeong's scene was in "The Servant", it was accompanied by an incredibly rich and captivating love story that really blew me away at the time. So if you think Korea cinema might be getting desperate, think again as many of these sexier Korean films are not simply for mature audiences because of what is seen on screen, but because the story itself demands maturity as a prerequisite for true appreciation of these adult orientated pieces of cinema.

Recent releases such as Jeong Ji-woo's "A Muse", which currently has 1,319,160 admissions to its name, and Kim Hyeong-jun's "The Scent", which is on 1,241,870, are tapping into this adult market and have been putting on respectable performances in the charts over the past month. An article on Chosunilbo.com suggested that "Ramping up the level of sexually-explicit content in domestic films is also increasingly being viewed as a way to fend off Hollywood", and with some pretty big Hollywood features hitting Korea this past month and scheduled for the Summer, Korean films such as these might just be able to earn a place in the charts by targeting a mature audience.