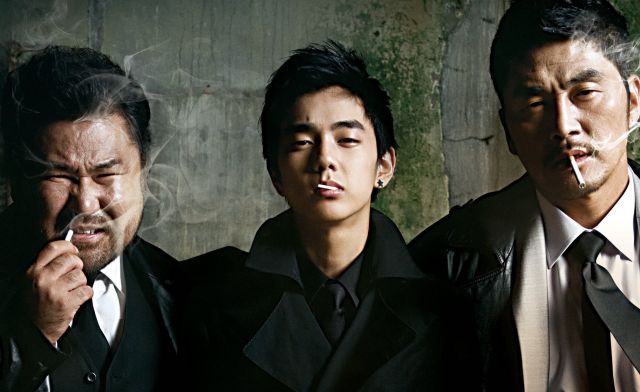 Kang-soo (played by Ko Chang-seok) used to have a decent job. Then he became kind of a hopeless screw-up. The catalyst for this was Jong-cheol (played by Yoo Seung-ho)- or more specifically the awkward circumstances regarding the poor teenager's birth. In the present day Jong-cheol tries, mostly ineffectively, to try and prevent Kang-soo from spiraling too hopelessly into oblivion but there's not that much to be done. Kang-soo is a fairly lousy parent, and he has to be brought down pretty low to finally do the right thing.

"City of Fathers" spells out its rather uninspiring circumstances by being, well, a mostly uninspired movie. This actually works better in execution than it may sound. Ko Chang-seok has made a career for himself playing generally ineffective supporting roles in grander narratives, and "City of Fathers" is chiefly distinguished by the fact that there's this big crime story that happens mostly in the background. We don't see very much of it mainly because to Kang-soo, the explanation for how outside forces turned him into a failure isn't as relevant as Kang-soo's continued decision to wallow in his worst excesses.

Jong-cheol is an interesting comparison point in this analysis because he seems like a generally good kid. But he's been able to achieve some degree of moral decency mostly by trying not to emulate his father in any way. If Busan (the movie's Korean title) is, as the English title says, a "City of Fathers", then it's not a city that has led by example. Jong-cheol unfortunately has no idea how to get out of this cycle. Although he would probably need money to try.

A consequence of all this malaise is that when gangster elements do show up in the latter part of the film, there's no real congratulatory element. There isn't a meaningful difference between good gangsters and bad gangsters. They're ll just gangsters, and jerks to boot. The feeble effort on the part of Jong-cheol's father to finally by a decent person is in the end too little too late, which makes sense. A single day of good effort can't negate a lifetime of being a scummy gangster.

The main flaw in "City of Fathers" is this same element. Because the characters aren't extraordinary in any way, it's difficult to get very worked up about them at any individual step in the process. Jong-cheol's relationship with his birth and upbringing, for example, is very thinly drawn. He shares a few vague thoughts and that about does it for his overall ruminating abilities.

This is actually quite appropriate when taken in greater context of the movie's greater lack of introspection. We can fetishize gangsters as much as we like but the simple fact of the matter is that members of the professional criminal classes are not highly reknowned for their insightful sense of self-awareness and deep personal conflict. They're bullies and wise guys who are more respondent to medical emergencies than they are greater ethical handwringing. In the context of "City of Fathers" this doesn't make for the most dramatic production, final act notwithstanidng, but I was nonetheless intrigued.