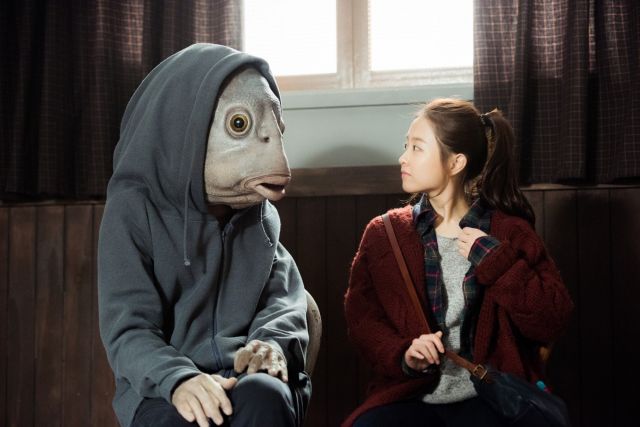 Goo (played by Lee Kwang-soo) is a completely unremarkable young man with no apparent distinguishing characteristics whatsoever. At least he was, until Goo's entire upper torso turned into...a fish. And that, right there, is the gimmick which makes up the entirity of "COLLECTIVE INVENTION", named after the painting by Rene Magritte. A man turns into a fish, and how exactly are we supposed to respond to this? Joo-jin (played by Park Bo-young) is the first person to meet the newly mutated Goo, and takes a step most of the other characters proceed to repeat. She monetizes it.

Don't let the fact that Lee Kwang-soo is given top-billing fool you- Goo is actually probably the least relevant character in "COLLECTIVE INVENTION" even though his fishhead condition is what sets up the entirity of the story. Sang-won (played by Lee Chun-hee) is actually the main perspective character. He's always wanted to get into journalism to do the right thing. Then Sang-won runs into Goo the fishman, and is suddenly at a loss as to what the right thing is even supposed to be.

That's the main satirical bent that director Kwon Oh-kwang is going for here. Not the press, not the legal system, not the political system, not the scientific community, not the religious community, not the family, no, not a single person in "COLLECTIVE INVENTION" has any idea how to respond properly to the existence of a man who is half fish. And most of the time, their attempts to help do not end well, as they get sidetracked very easily. Sang-won and Joo-jin are frequently incapable of completing even the simplest errands without getting distracted somehow.

Take the essential opening scene where Joo-jin explains to Sang-won how she met Goo in the first place. What starts out as a transparent story of young people dressed up in Joseon garb soon turns bizarre and sordid, and Joo-jin justifies the weird direction of the story by claiming it is somehow quintessentially Korean. Even in context that explanation makes no sense. Joo-jin is just grasping at whatever excuse she can think of to avoid being self-reflective in any way.

"COLLECTIVE INVENTION" is ninety minutes of that same joke being repeated in slightly different ways with slightly different cultural norms. While the humor is at times on point, "COLLECTIVE INVENTION" can never really escape the limitations of its own premise. It's really more a short film than something that really warrants feature length discussion. Again, Goo is a completely unremarkable person except for the whole fish head thing- a fact he has to actually explain at one point as the story around him circles irrelevantly.