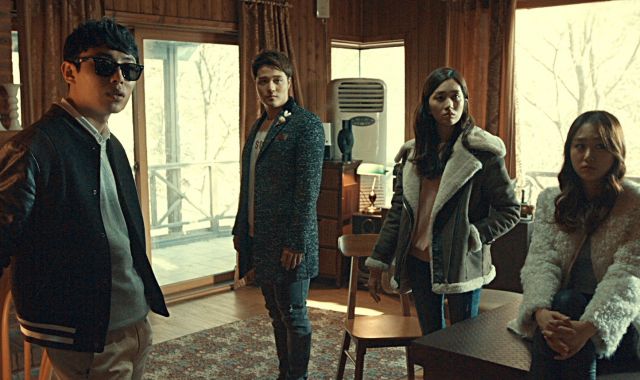 Normally I like to start these reviews out with a basic description of the movie's action. Who are the characters? What are they doing? Why should we care? "Collision" is rather challenging in this regard, because as much as I try, it's hard to even so much as generalize their motives. I mean, all right, yeah, they don't want to be violently murdered in a cabin in the middle of nowhere. Does anyone really?

I'm honestly not being facetious at all when I write that the first character we see, the one who dies a few minutes in, probably has the most personality of the cast because his personal characteristics include "has tattoos" and "enjoys rough sex". Other characters have similarly shallow descriptors, like, woman who flirts after having a few drinks. Man who enjoys cooking. Other man who wears a mask and speaks Chinese. Guy who talks on the phone. That other guy who also wears a mask and speaks Chinese.

The alleged story is so thin I'm still having trouble figuring out what exactly the significance of the late plot twist was supposed to be, or why anyone who didn't happen to be in the cabin at the wrong place at the wrong time needed to die at all. Actually wait, why did the people at the cabin have to die either? Relatively few people were even expecting to get a hold of all the money anyway, and a lot of them straight up didn't even know the money existed.

Now, as a genre horror film, it is possible that I am overthinking the story just a tad. All the same, if I try to look at "Collision" through the prism of production values alone, we are looking at a thoroughly average movie at best. And bear in mind, I'm holding "Collision" to the genre horror film standard, which doesn't even require a budget at all. Just a guy in the crew who knows a good butcher and another guy who knows how to handle a camera semi-competently.

At some points "Collision" does almost manage to be bad in a kind-of-funny way. I rather liked the late exchange about how "you kill for money, but I kill for fun!" Even in context that makes barely any sense, but it is nonetheless fairly humorous how that dialogue is immediately followed by a bout of fumbling incompetence where the "winner" is practically determined by accident.

I mean come on, there's gotta be some humor in how these professional killers really aren't very good at their jobs, and should probably stick to the safety of long-range assassination plots instead of the inherent riskiness of close quarters combat. So I guess if we want to go by bare minimum standards, "Collision" is probably a fairly accurate depiction of the foibles that ensue when people inside a cabin try to kill each other or hide from each other with whatever random junk happens to be lying around. "Collision" may not be all that entertaining in general, but it does have that going for it.