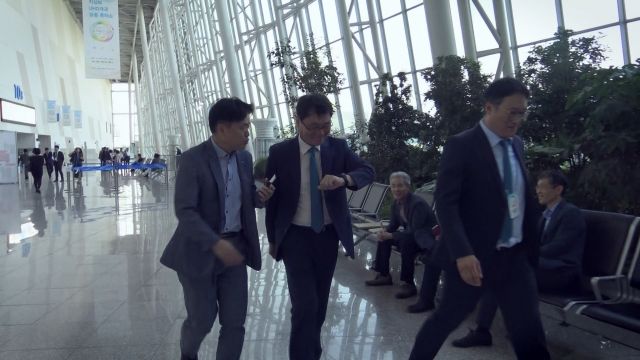 In terms of explicit content, "Criminal Conspiracy" does not differ that much from "Seven Years-Journalism without Journalist", another documentary released earlier this year that also dealt with actions by the past two conservative South Korean governments to manipulate the news wings of MBC and KBS. There's more emphasis on personal interviews, and a broader outline emphasizing the sheer scope of actions Lee Myung-bak and Park Geun-hye tried to take. But really, the main difference is the seven months difference between when these movies were released.

What a change that makes to context! Now, instead of being a quiet note of alarm about government gone wrong, "Criminal Conspiracy" is more a remembrance piece. The men assigned to run MBC and KBS as state propaganda outlets remain in power, and the documentary is a reminder of how constant, loud criticism of their activities is the only way to curb them. The at times hopeless tone of interviews, taken by people who had no way of knowing if when or how the conservative government would end, does a lot to emphasize just how bad the situation was.

This in spite of a rather glaring irony. The men Lee Myung-bak hand-picked to run media outlets apparently don't actually know very much about how to manage hostile press. Director Choi Seungho makes frequent use of ambush journalism to try and get these bigwigs to answer basic questions about their involvement with the government. Their very uninspiring responses of "we'll talk later" only make it look like they have something to hide.

Cue the next questionable media montage. These run a fairly wide gamut. Mostly it's boring technical puff pieces that laypeople are unlikely to be able to accurately parse. Then, as we move into the Park Geun-hye years, the propaganda becomes increasingly ludicrous. There's slavish devotion to Park Geun-hye's random appearances at popular public events, and there's even a cameo scene in "The Flower in Prison" where an obvious reference to Park Geun-hye's scandals is dismissively brushed aside.

The even better contrast is with actual serious protests by reporters while all of this was going on. These were, of course, ignored by the very same media institutions which had made a point of kneecapping any news story that could potentially reflect poorly on the conservative government. The sheer helplessness, and even tears by these lifelong media professionals, are pretty humbling.

This all only makes the ongoing trials of Park Geun-hye and her cronies all the more satisfying- but not the specific cronies we see in "Criminal Conspiracy". After all, there's no law against media institutions taking cues from the official government line. It's just implied that democracies don't engage in this sort of thing. In reality, of course, powerful forces will influence the media whenever and wherever they can for their own dark benefit.

I mean that literally more than metaphorically- effective propaganda is propaganda that is not obviously recognized as such by the general public. "Criminal Conspiracy" brings to my mind similar patronage between the leaders in American political, corporate, and media institutions. I shudder to think how reporters in my country are far more likely to quit from a personal slight than they are from obviously underhanded editorial influence. How badly we need a "Criminal Conspiracy" of our own.

"Criminal Conspiracy" is directed by Choi Seungho and written by Jeong Jae-hong.