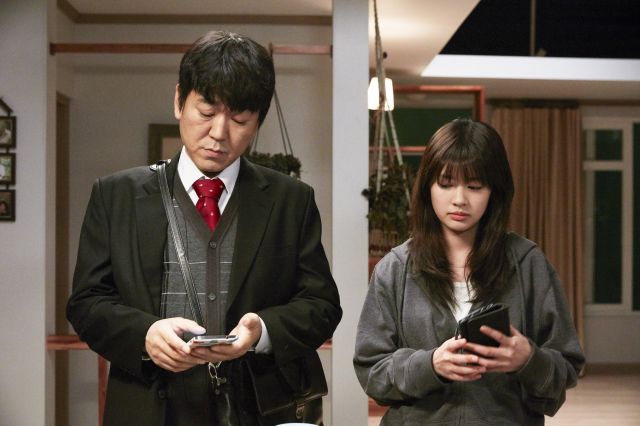 Sang-tae (played by Yoon Je-moon) and Do-yeon (played by Jung So-min) are daddy and daughter, respectively. Oh sure, it was fun back in the old days, when Do-yeon loved her daddy ever so much and wanted to marry him. But now Do-yeon is a teenager with her own problems and they never even have time to so much as talk to each other. Circumstance soon forces them to communicate, though, as they must spend a week in each other's bodies, avoiding detection by Sang-tae's co-workers and Do-yeon's classmates.

...I'm assuming it's a week, anyway, since "Daddy You, Daughter Me" is based on the Japanese novel Seven Days of a Daddy and Daughter, itself adapted to a Japanese drama. Which incidentally is a better format than the film one here. There's plenty of hints of subplots, from the romance Do-tae foments between Sang-tae's subordinates at work, to Sang-tae trying to set Do-yeon up with the right friends at school for academic success. Neither plotline gets a convincing resolution though.

Of course, the main event here is the body switch and how it explores the father-daughter relationship. Oh, that and the jokes, Can't forget those. Jung So-min is my favorite as the generally cranky middle-aged man in a teenage girl's body. Yoon Je-moon, by contrast, is a lot more demure as Do-yeon than Jung So-min is, although I chalk this up partially to context. When Sang-tae and Do-yeon are together, it's only natural that Do-yeon defer to her father in a properly aggressive situation. Without him around, Do-yeon is better able to project authority.

This is fortunate, since Sang-tae's job mainly consists of being authoritative, apparently. Or maybe Sang-tae is just so up-to-date on his work that he can skate by on autopilot for a week without any big disasters coming up. Actually, one of the big ironies of Sang-tae's work is that he's employed in the cosmetics industry, and apparently develops product lines with a minimum understanding of what is actually relevant and useful to real teenage girls.

This, too, is paralleled in Do-yeon's main storyline, which is trying to get the attentions of a well-liked boy. Vague creepiness notwithstanding, we can see how many young women could benefit from their dad's aloofness. Whether Sang-tae likes a potential boyfriend, even if he won't admit it, is very important because Sang-tae is a good dad who has his daughter's best interests at heart. Indeed, aside from some mild attempts at toying with one another, the overall experience brings Sang-tae and Do-yeon closer together because both sincerely want to help each other.

"Daddy You, Daughter Me" delivers perfectly on its promised concept. The problem with the movie, if you're really cynical enough to call it a problem, is that "Daddy You, Daughter Me" only goes that far and never really manages to go anywhere else. If you watch this movie, you need to be prepared to be entertained by basic absurdity of Yoon Je-moon pretending to be a teenage girl, Jung So-min pretending to be a middle-aged man, and the inevitable fuzzies that pop up when they're happy, both with each other and the world around them.

"[HanCinema's Film Review] "Daddy You, Daughter Me""
by HanCinema is licensed under a Creative Commons Attribution-Share Alike 3.0 Unported License.