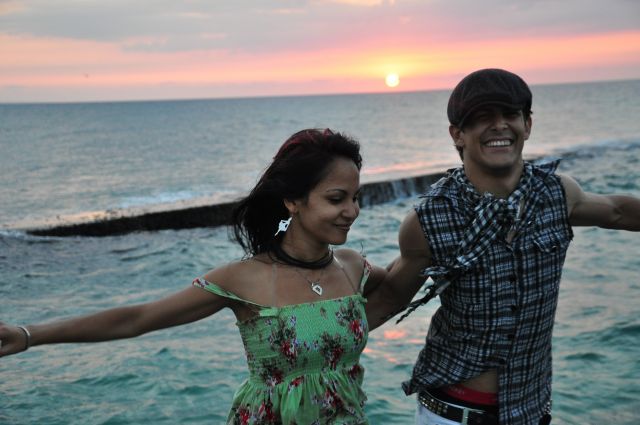 The documentary opens with a woman, beautifully silhouetted by the beach at sunset, in an entrancing rhythmic dance. While watching this the viewer is also exposed to similarly well-matched Cuban dance music. We don't actually learn much from this opening shot, nor from the various interviews, discussions, and further performances by the singers and dancers who practice this artform. Rather, we get a strong sense of the cultural identity that defines these individuals.

And that identity is for the most part Korean. Korean diaspora to be sure- from ancestors generations ago who through random happenstance crossed two oceans to arrive in Cuba, and slowly fused themselves into the local culture. These stories, too, are lovingly rendered in terms of personal aesthetics. These people are the product of the combination of two cultures- and this is the story of their lives.

The way this journey affected these men and women of generations past, and the emotional bonds they forged to get through these difficulties, is strongly detailed. At one point near the end an entire extended letter from one loved one to another is read out loud. The pain, seriousness, and sadness of this moment is immensely distressing- and yet, as we know from the way the rest of the documentary is presented, life moved on. And there's a strong emotional catharsis, relating the more romantic parts of this fusion culture with the sometimes sad tale of how it was created.

"Dance of Time" is not a documentary particularly concerned with dealing in historical, objective facts. Glimpses of Cuba's political history are seen, but the effect these events have on the people profiled here is relatively minimal. There's a certain appropriate air about this- normal people, for the most part, are not particularly inconvenienced by their government in day-to-day life. Indeed, the closest we ever really get to a direct confrontation is when one woman describes an anecdote involving the time she met Fidel Castro. And this moment, too, takes on the dreamlike quality of just being a kind of interesting story that happened.

It's a very familial tone, for the most part. The documentary reads like a long story of catching up with distant relatives from the other side of the world. Obviously, the Koreans who live in Cuba are now a very culturally merged people. While they still hold on to many parts of their Korean identity and culture, there is nonetheless a very Cuban aesthetic that defines their identitites, especially for the younger generations. There's an admiration for Korea to be sure, but no sense of othering. No notion that it's a place to which they must return lest their souls feel incomplete.

That is what the "Dance of Time" is for a successful transplant community- time may ebb on and on, but these Korean-Cubans have found their own place for themselves, for the most part. There's a peace and serenity about their lives that's admirable. Consider, for a moment, that if they wanted to go back to Korea, they'd have to make the unenviable choice of whether to go either to the North or the South. It's hard to imagine anyone being particularly excited about that dilemma- not when the fused Korean-Cuban atmosphere of dance and music offers so much on its own merits. It's a lovely feeling, and director Son Il-Gong does an excellent job of invoking it.