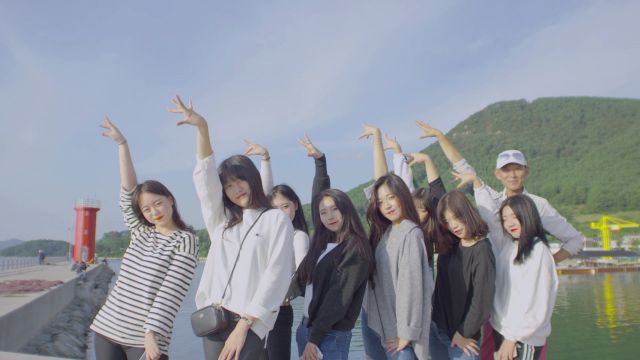 Geoje Girls' Commercial High School is located in the rural outskirts of Geoje Island. Its stated purpose is to prepare students to enter the workforce. But as it happens, through the guidance of a passionate coach, an entire extracurricular DanceSport squad has formed. DanceSport is a form of competitive exhibition dancing, and apparently South Korea has a dedicated official high school DanceSport competition. I had to look all this up. "Dancesport Girls" never actually explains it.

Indeed, there's lot of stuff "Dancesport Girls" does not actually do. We never actually see the team do their full four-minute routine. Weirdly enough you can watch the full four-minute routine in the videos section of HanCinema, which is what I had to do. I was surprised to learn that the full competition piece was actually a medley of three different songs, since the only part of the sequence we ever see the team practice in the documentary itself is the one set to "Perhaps Perhaps Perhaps" by the Pussycat Dolls.

I don't fault director Lee Seung-moon for this omission, since the reasons were no doubt legal. Copyright law is a mess when it comes to famous songs being performed by non-famous people and then being distributed for in video form for profit. In all likelihood Lee Sung-moon had to limit himself to the Pussycatt Dolls sequence because that was the only song with royalties affordable enough that KBS was willing to pay for them.

Something else missing from "Dancesport Girls" is much in the way of interviews from individual team members. It's at this point that the sheer lack of useful information from this documentary finally serves an actual purpose. Everything is supposed to be completely naturalistic. There's no narration or explanation because this isn't stuff the "Dancesport Girls" talk to each other about on a regular basis for the sake of exposition. They're all just normal teenage girls who work hard and play hard.

Far from being about DanceSport itself, "Dancesport Girls" is really more about what life is like for high school students in the more obscure parts of South Korea who are separated from the country's more famous cosmopolitan culture. The big impressive irony is that far from seeming like country bumpkins, the girls are actually quite mature and sophisticated. A lot of this also comes from their home lives, of which we see quite a bit, where they frequently have to help out their families.

There's no ridiculous clichés about stern parents disapproving their daughters' participation in the salacious arena of DanceSport, because why would there be? The girls undertake the project passionately and have built close social bonds with their peers thanks to that. Certainly there are far worse ways for them to spend their time. And there are worse way for you to spend your time than by watching "Dancesport Girls" it's just, unless you're really curious about the lifestyle and offbeat hobbies of random South Korean girls, "Dancesport Girls" is not going to have a lot of deeper substance than that.