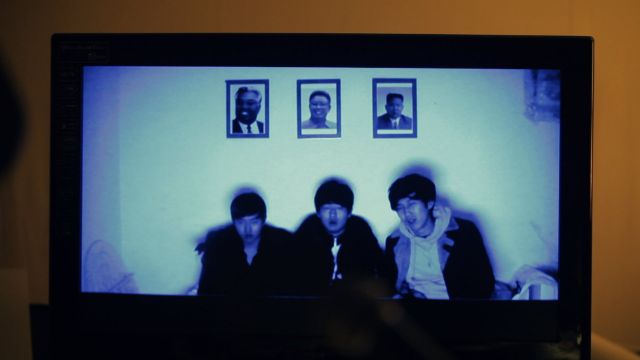 On the northeastern rim of Seoul a sorry looking group of miserable young people cope with the fact that they have terrible lives. They don't live in the glitzy parts of Korea that get featured in marketing by the Ministry of Tourism. No, they live in a slum neighborhood with unreliable parents. There's no sanitation, lots of booze, hideous architecture, and what few employment opportunities there are manage to be pretty degrading. This is the South Korea your typical North Korean defector runs into- the place where no one has any money.

"Dear Dictator" is not actually all that significantly different from your typical independent film that aims to expose the miseries of poverty. Where writer/director Lee Sang-woon-IV rather brilliantly differs from his peers is that he's taken this critique of capitalism to its most logical conclusion, setting up the despair in "Dear Dictator" as possible content for a North Korean propaganda film. This framing device, even moreso than usual, really highlights how capitalism is the problem.

Take, for example, the alcohol. South Korea, like other capitalist countries, produces alcohol so efficiently it can be bought anywhere at any time. That's great if you love booze. It's not so great if you have an abusive parent who loves booze. Especially when said parent's habit is rather perversely kept alive by the fact that empty soju battles can be recycled for the pocket change necessary to buy...soju bottles filled with soju. Hey man, the system works. For the soju manufacturer anyway.

Religion, too, is the opiate of the masses. It eases the pain, but it also causes you to slowly lose your mind and gabber like a crazy person, willing to sell any possible nearby possession for the promise of more delicious religion. Every single subplot goes on and on like this, whether the subject be sex, suicide, violence, brand-name products, or just the question of why does it matter where we defecate if we're surrounded by trash. The bleak winter background only adds to the malaise.

But it's the long-form objective that makes "Dear Dictator" such a puzzling movie to watch. South Koreans can be arrested for talking to North Koreans. And yet Lee Sang-woon-IV somehow managed to fund a North Korean propaganda film and distribute it domestically, the only apparent excuse being that as an artistic statement "Dear Dictator" isn't technically treason. Apparently only active sedition warrants punishment via the National Security Law.

It's not as strange as it sounds, really. I think the bigger point Lee Sang-woo-IV is making is that Big Brother can actually be a good thing, because even if your big brother is a bit of a bully at least he pays attention to you. The lead characters of "Dear Dictator" sink so low that they're willing to do just about anything to anyone just so long as they're able to gain some meager token of genuine affection. I don't think "Dear Dictator" presents any of kind serious argument for defecting to the North, but it is a pretty stark reminder that South Korea's political propaganda isn't to be trusted either.