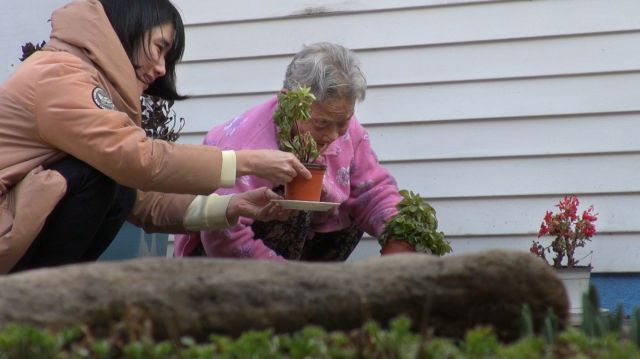 One fairly disconcerting day, director Lee So-hyun learned that her grandmother had tried to commit suicide. If that opening line sounds morose and out of nowhere, well, just imagine how it felt to Lee So-hyun. Throughout "Dear Grandma", Lee So-hyun tries to capture her grandmother's unique and somewhat anachronistic personality which is constantly rather at odds with the documentary's premise. Far from seeming at all suicidal, the main character in "Dear Grandma" is oddly sarcastically acerbic.

I've noticed this is a fairly recurrent trend with documentaries about South Korea's aging rural population. They have oddly little patience. You probably wouldn't either, if you were a nonagenerian with almost nothing to do during the day. Prior to the arrival of Lee So-hyun and her camera it's fairly clear that all grandma does is get liquor for her (at this point) similarly old son and do household chores. It's not an abusive relationship, just one filled with some fairly dull routine.

And then Lee So-hyun starts asking questions. It soon becomes clear that the director's interest in her grandmother's life is no filmic abstraction. Lee So-hyun's parents themselves were so busy that she was mostly raised by her grandmother, while still knowing relatively little about the old woman and what she really wanted in life. Oddly enough this question just never came up. There's a particularly charming story in here about how once, long ago, at the age of eighteen this woman was party to an arranged marriage with a man twelve years her senior.

Like most of the reminisces in "Dear Grandma", this trip down memory lane is made more with a tinge of annoyance than hatred. Suicide attempt notwithstanding the portrait of life we see in this movie is largely a happy one- it's just too heavily disconnected from a bygone era. Even little moments like memorial rites are treated with a serious solemnity that just seems completely anachronistic in a modern day context.

As the centerpiece of this year's women's film festival in Cheonan, "Dear Grandma", provides a fairly excellent illustration of the shared feminine experience by highlighting these radical cultural differences. All the while, though, the sense of womanhood and family is overpowering, to the point of being transcendent. It's likely to inspire thoughts of your own grandparents, and really just work as a kind of surprise as to how right until their last moments, they embodied the beliefs of a world that is now long gone. And yet for all that, you still loved them, didn't you?

Movies like "Dear Grandma" are technically pointless, in that they're really just well-edited home movies of personal family situations. Yet oddly enough, it's terribly comforting to get these broad reminders of the universal human experience. When it gets right down it, these powerful emotional connections are what really make us who we are. Real life is not joy or tragedy, but rather just the blunt realization that without other people it's surprisingly easy to get freakishly bored, especially when you're old.