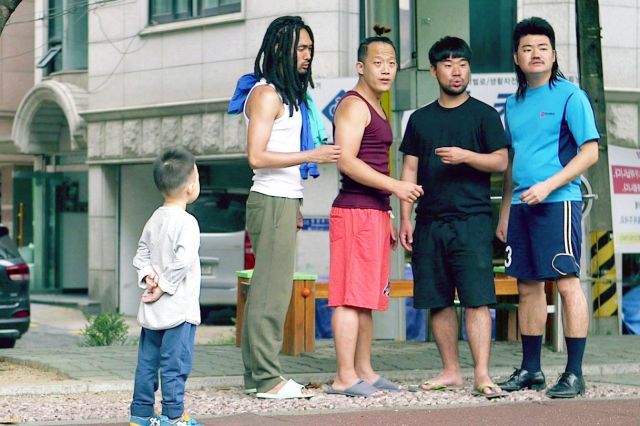 Il-rok (played by Baek Seung-hwan-I) is a soft-spoken machinist who eats ramen three times a day and somehow still has washboard abs. Anyway, at the beginning of "Delta Boys" he's hanging out with his old friend Ye-geon (played by Lee Woong-bin) who has just come back from a long stint in the United States. We can tell because Ye-geon is constantly inserting gangsta style English into his Korean sentences. This is intended to impress the people around him, but mostly all Ye-geon does is annoy them.

So! Ye-geon encourages Il-rok to remember his musical dreams. From this, we meet Dae-yong (played by Shin Min-jae), a fishmonger who inexpicably is always wearing a suit when he's not at the market. Then there's Joon-se (played by Kim Choong-gil), who runs a food cart with his wife Ji-hye (played by Yoon Ji-hye-I). They have constant explosive fights about how much time Joon-se spends at music practice, Ji-hye suspecting that they aren't actually even doing anything.

Plot twist- they aren't. In what for me is a first in the whole "inspirational story about unlikely people with musical talent" genre, once all the storybuilding necessary to get the titular "Delta Boys" together in the same room is fully established, they don't do any singing or practice- at least, not consistently enough to really befit their larger ambitions. They just eat food. Drink liquor. Talk about whatever random topic crosses their mind. Go back to their jobs. Then they come back again the next day and do the exact same thing.

It's all very funny. Most obviously in the sense of comedic repartee, as we watch these five sometimes wildly differing personalities run afoul of each other. There's just something so awfully morose about how all these people have such glaring disturbing flaws, yet never discuss them. Over time, they all come to love each other, whatever the immediate conflict, because they happen to like hanging out together.

But "Delta Boys" is also funny in the meta sense because that whole "inspirational story about unlikely people with musical talent" genre I mentioned earlier? In real life, when people try to emulate that storytelling device, they tend to just end up acting like the four guys in "Delta Boys" do, forgetting their actual goal in the name of just talking tough. A late plot twist, though obviously tragic, is also woefully predictable because Il-rok is not the kind of guy who carefully reads forms.

None of the characters in "Delta Boys" are like that. It's their whole charm. They're working class guys who stayed working class guys because when it gets right down to it, the world needs people who provide services more than it needs singers. All the same, they find sincere friendship through song and when we finally see their performance, generally amateurish though it is, there's a lot of heart there. The "Delta Boys" enjoy what they do and really, that's all that matters in the end.