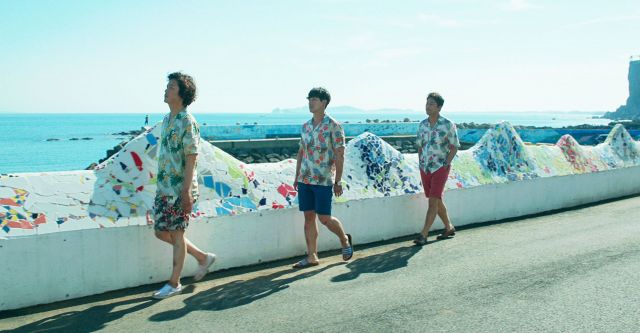 Joong-pil (played by Shin Ha-kyun), Soo-tak (played by Park Hee-soon), and Eun-dong (played by Oh Man-seok) are three close college friends who unexpectedly reunite quite later in life upon some unexpected news. Their life positions are in varying states of malaise. Eun-dong has a semi-famous job but he's kind of bored. Joong-pil has a decent job but he's fixated on a long finished romance. Soo-tak has no job at all and is contemplating suicide. The solution to all of these problems is, of course, a trip to Jeju Island.

I really do admire the Jeju Film Commission. Most film commissions, you can only tell they were involved at all by reading the credits. But time and again the Jeju Film Commission always makes a point of throwing their support behind films and dramas that are so explicitly about Jeju they're practically advertisements. It does help that at this point South Korean culture writ large considers Jeju a magical getaway. Note how Soo-tak's suicidal impulses are briefly curbed by the prospect that on Jeju Island he might get laid.

That bit of dark comedy was my favorite part of "DETOUR". Yes it's crude and doesn't necessarily make Soo-tak a more sympathetic character but it's an all too accurate characterization of the male psyche that the best way for a man to feel less impotent is by having sex. Luckily, by the end Soo-tak is mostly satisfied simply by having had the chance to act like a real man. Even so, Park Hee-soon is a remarkably convincing pathetic desperate guy who steals most of his scenes.

Everyone else...eh, they're all right. Joong-pil has the main central character arc of having to get over the distant past and life live in the present. His love story, while not altogether exciting, does have its moments- like a visit to Love Land prompted by a suggestion from a person who obviously does not know anything about Love Land aside from the name. The light comedy is what permeates "DETOUR" rather than character arcs, and on these points the movie well acquits itself.

Eun-dong ends up being the main useful perspective character, even though he's the least well in-focus, because he's a reminder that even a "successful" person is not necessarily constantly happy all the time. It's also interesting to note that Eun-dong is clearly more a loving father than a loving husband. Against the backdrop of Joong-pil and Soo-tak trying to find validation in romance, Eun-dong is a reminder that there is more to life than just that.

"DETOUR" is generally pretty fun and self-aware. While the hand of the Jeju Film Commission is obvious, at the same time the movie takes some light-hearted jabs at Jeju Island stereotypes. Observe the ultimate outcome of the spontaneous street band scene, the problems which come up as a result of the protagonists staying at a guest house so far from the city, or the obvious familarity of Jeju Island's "traditional" laundry detergent. "DETOUR" is more funny than witty- and for me, at least, that's a nice change in tone from the usual.