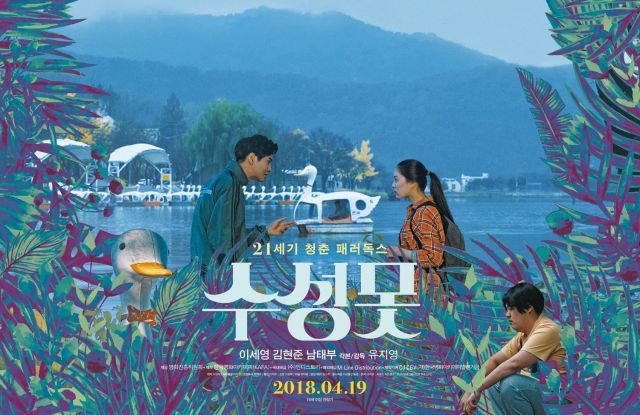 Suseong Lake is a location in Daegu. It's just a normal lake, and as is common in South Korea, there are swan boats that people can use to paddle around. It's the job of Hee-jeong (played by Lee Se-young) to manage those swan boats, although she has dreams of bigger and better things. Like transferring to a university in Seoul. Why does Hee-jeong want to go to Seoul so badly? Well uh...it's a goal in search of a motivation. But at least it keeps her from going suicidal.

"Duck Town" is actually not quite so frightening as that casual mention of suicide makes it sound. Although there is a lot of casual discussion of suicide in this movie. Yeong-mok (played by Kim Hyun-joon) is writing a whole book on the topic, although Yeong-mok himself is a surprisingly chipper fellow. He accidentally runs across blackmail material to use on Hee-jeong, and proceeds to utilize said material mainly just for the fun of it.

Alas, Hee-jeong is unmoved by Yeong-mok's teasing flirtations. Hee-jeong is also troublingly uninterested in her brother Hee-joon (played by Nam Tae-boo), who keeps showing symptoms of clinical depression. Well, no, Hee-jeong definitely cares about her brother. It's just that her solutions for his mental issues are frustratingly slight and condescending. Hee-jeong listens to other characters without ever really understanding the subtext of their words and actions.

Take Mr. Park (played Kang Shin-il), who also ends up making an odd request of Hee-jeong, which she complies with unquestioningly. That whole sequence is some pretty fundamentally weird dark comedy, yet Hee-jeong goes through it without ever stopping to think that maybe life has value and that Mr. Park's notions of martyrdym are fundamentally flawed. The sheer cavaliar discussion of suicide, with no real critical response save for the occasional insult, really does underscore how people manage to talk themselves into the practice.

This is also perfectly encapsulated in the rather abrupt ending, which is more about symbolism than substance. None of the four major characters have actually solved any of their problems. They still have a fundamentally meaningless existence. That one character manages to gain a brief glance of hope proves somewhat ominous. The character in question may well have just come under the influence of a cult. Yet even a cult provides that all important motivation factor.

That much is probably the most twisted joke of all. Suicide, while not an admirable goal, at least requires determination and drive in order to achieve. What is the purpose of any existence, after all, except to accomplish something? That's how I interpret the story of the doomed guitarist anyway. If you really think about it, busking is a meaningless act. But it is nonetheless a fun one. To a person who has nothing to live for, though, that's not the first thought to come to mind. Yet even in her greatest moments of bravado, Hee-jeong has nothing to strive for. That's the key to her true weakness, which comes to surface sooner literally, and later metaphorically.