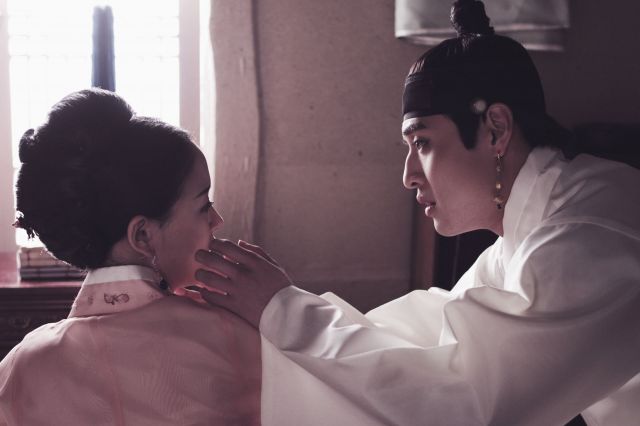 Min-jae (played by Shin Ha-kyun) is a military man on a mission- to keep his eye on Bang-won (played by Jang Hyuk). Well, that's technically the plot anyway. While "Empire of Lust" goes to a lot of effort to nail everything about the background narrative to a specific historical time and place...it's actually surprisingly irrelevant to anything that actually happens. The main important movements in the story are mostly the machinations of Ga-hee (played by Kang Han-na) and Jin (played by Kang Ha-neul). The motivations, typically rape.

In any case, I suppose that much establishes all you perverts out there will probably get your jollies from "Empire of Lust". As for everyone else, well, I'm not so sure. The love story between Min-jae and Ga-hee is actually kind of weird, because she reminds him of his mom. That's something else I really don't want to be thinking about during sex scenes, even if Mr. Freud was so kind as to inspire every would-be artist everywhere to make this association.

The historical angle, likewise, has pretensions of turning this into a love story for the ages. The problem is that Min-jae barely seems relevant to the royal intrigues at all except as a general observer. When the epic fight scene comes up at the end, I mostly just felt sorry for all the soldiers. Personally, that mainly seemed like bad resource management on the part of the bad guys. By that point in the story they've pretty clearly got more important problems than Min-jae to deal with.

So let's see, plenty of sex, passable amount of well-choreographed violence, uninspiring story...what else...well, I suppose "Empire of Lust" at least looks pretty good. The cinematography is in the same Joseon dark side mode as "The Fatal Encounter". Even in scenes as generally cheerful as Ga-hee's introduction everything feels really dark and gritty, like we're only one social faux pas away from everybody taking out their swords and making a huge mess of everything.