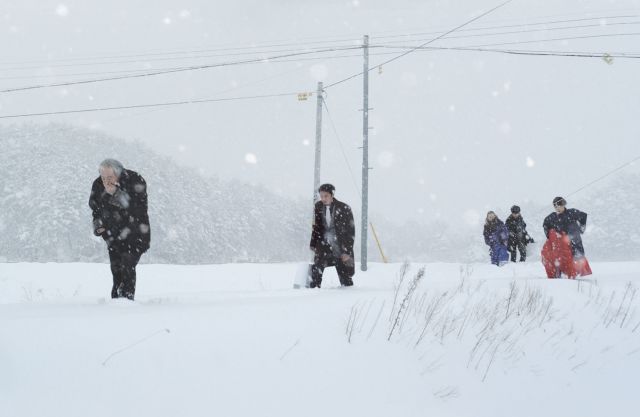 Normally when we think of retirement, we think of, well, good things. We think about all of the colleagues we've known over the years stopping by to make a final congratulatory remark. We think of the reminisces of the times gone by, and all the wonderful experiences therein. We think about having made a nice life for ourselves, and how to enjoy retirement. That's the romantic view anyway. "End of Winter" paints a rather more bleak picture- thank goodness that much is over and done with.

The title is both literal and metaphorical. Just as final snowstorm closes the school year out and ends winter, so too is the central family in "End of Winter" forced to awkwardly spend time together when it's obvious that they don't particularly want to. They're not really a huggy family that likes talking about their feelings. In fact, it would probably be accurate to say that the pivotal decision which sets off the film's plot is precisely a result of one family member deciding to heck with feelings, he doesn't like any of these people that much anyway.

This is, of course, to the extent that a plot exists at all. Director Kim Dae-hwan presents a story here that's not really so much a story as it is a pronounced lack of a story. The obvious questions aren't answered, but then, they don't really needed to be answered. It's obvious from the way the patriarch and matriarch of the family interact that their relationship has probably been an icy one for quite some time. Maybe at one, long ago point there was a happy spring to this marriage. But the movie's title isn't end of spring. It's "End of Winter".

Overall I suspect that the reason the older family members generally have very stiff personalities is probably just because they're older. Daughter-in-law Hye-jeong (played by Lee Sang-hee) has a much more chipper attitude- but to a fairly large extent it's a forced one. It eventually breaks down, but even there's not much serious reaction. Director Kim Dae-hwan consistently eschews any sort of theatrics in favor of the cold family dynamic.

It's for all these reasons that "End of Winter" is a somewhat difficult movie to recommend. This is a film about a family who is stuck with each other, literally because of a snowstorm, and metaphorically because they're family and can never really escape each other. If they don't especially want to spend time with each other, then why should you as a viewer want to spend time with them?

I can only speak for myself on that point- but speaking as someone who also doesn't come from an especially huggy family, it's nice to get some perspective. Sometimes people refuse to talk less out of rudeness and more because they're too tired at the moment to want to get wrapped up in another fight. In this sense Director Kim Dae-hwan presents a compelling lack-of-story about family life that's not terribly exciting, but then that's what family is. At best, it's having someone who will help you throw snowballs at trees.