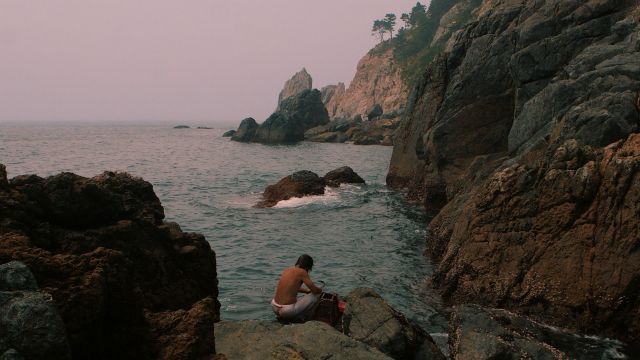 On an island in the South Sea lives a monk (played by Moon Seok-beom) who walks around in ratty clothes, takes phone calls, and interacts with animals. Occasionally other people come to this island. They hang out with the monk briefly, and then through some ominous photographic fakery they're gone. Not dead, I don't think, just gone. And then it's back to regular mountain life, where nothing of much apparent relevance happens. Yes, that's right. "Eyelids" is one of those films- the kind that make no sense whatsoever unless put under the lens of excessive interpretation.

All right, here goes. The island is not a literal island. It is a metaphor for the afterlife. The old man shepherds people to the afterlife because it's his job and it has always been his job. But the afterlife is actually a pretty lousy place to be- you're better off just being reincarnated. This much especially makes sense when we consider that people don't generally want to die. Even a suicidal person tends to think in that way because they want to make a fresh start, either for themselves or a loved one.

In the vision of writer/director O Muel, that's all there really is to it. Actually I 'm not sure whether it's reasonable to call O Muel the writer of "Eyelids", because there really isn't anything here that can be called a script. Outside from a few old stories and some minor dialogue all that really happens is that the camera spends several minutes fixated on some random aspect of the environment, and the viewer is left admiring the natural beauty until such and such point that appreciation transforms into boredom.

I suppose on the metaphorical level this does make some sense. If you've ever tried to do the whole Walden thing, then you've probably noticed it's much harder now than it was back in Thoreau's day because we've become so cued in to the need for constant distractions. It's not OK for people to be bored anymore. The monk's ability to tolerate boredom is probably the main reason why he doesn't just reincarnate himself.

You may have noticed that I have yet to come up with any particular compelling reasons for why "Eyelids" is a film that needs to be watched. And that's because there aren't any. On the literal level this is just a movie about staring into the abyss, except that the abyss is disguised as a beautiful island. And of course even that much looks to be illusion when we consider what happens when the monk gets into a fight with his pets.

The monk's creature comforts, however mild, are still capable of setting him into a rage should he lose that little sense of entitlement. Maybe that alone should be the ultimate takeaway from "Eyelids". Life is such an inherently pointless endeavor to begin with that losing one's life isn't really that big a deal. That's admittedly a pretty convenient philosophy coming from a living person but what do you want? It's not we can ask dead people whether or not they liked "Eyelids".