[HanCinema's Film Review] "Female Wars: The Man Who Moved In" 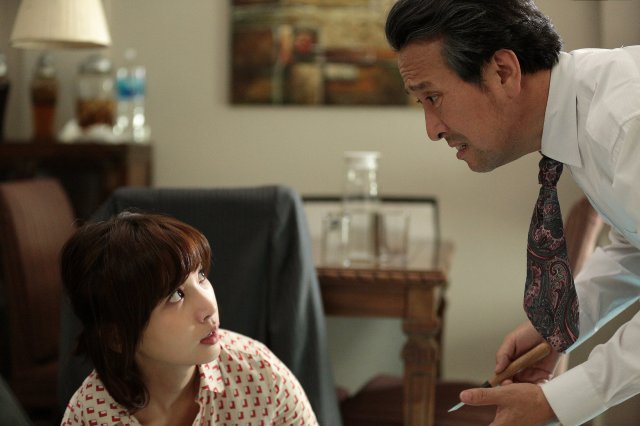 For those expecting lurid entertainment, "Female Wars: The Man Who Moved In" successfully offers brief flashes of sexiness. Im Yi-ji is quite attractive as the buxom housewife Min-jeong. Her husband Bong-goo (played by Kim Jung-wook) is astonished that she could ever want to marry a schlub like him. Then Deok-man (played by Ahn Suk-hwan) moves in next door, and it turns out he's a pedophile who assaulted Min-jeong as a child and is eyeing a new victim.

As grim as that description may sound, "Female Wars: The Man Who Moved In" is a better study of pedophiles than it has any right to be for a fairly counterintuitive reason. Ahn Suk-hwan plays Deok-man as a complete buffoon. While early scenes suggest that Deok-man might be playing a confidence game, it becomes over time that his main asset is just picking victims who are really dumb. Children are dumb. And children being raised by single mothers aren't just dumb, their parents almost by definition aren't very good at judging the moral character of men.

Min-jeong is thus put in the awful position of having to stop Deok-man, while also not really wanting to tell anyone that she was a past victim of child abuse. Ensuing scenes along these lines blend farce with horror, as Min-jeong's ineffective schemes run afoul of the fact that other people see Deok-man as too stupid to be dangerous. The end of the first half hints of some true menace on Deok-man's park, as we watch him spike some whiskey glasses.

Unfortunately the intriguing social commentary of the first half of "Female Wars: The Man Who Moved In" is mostly lost in the second half. An emotional struggle where Min-jeong tells Bong-goo the truth, trusting the man she loves to help her bring Deok-man down once and for all, would be the story's satisfying endpoint. Instead, the confrontations between Min-jeong and Deok-man just continue to escalate with no real coherent logic. A random beehive of all things is the decisive end move of the climax.

Perhaps I had set my hopes a little too high for a project that rather unsubtly contrives excuses to show off Im Yi-ji in her underwear. Although really, after "How to Live in This World" managed a story that both sexily and poignantly marital betrayal as an expression of marital love, it was easy to see a potentially strong narrative at the margins here. Min-jeong being genuinely emotionally vulnerable and not particularly confident is a neat, realistic twist on the story of the righteous, vengeful woman.

The trouble is, a setup like that doesn't lend itself well to a climax that involves traditionally violent setpieces. For a pedophile that's implied to have been active for decades, Deok-man has no sense of when it's time to cut his losses and run. Additionally, Min-jeong really is a little too helpless at points. The last thing I wanted to see is Deok-man victimize her yet again, and such scenes somehow happen with more frequency than the sexy ones.