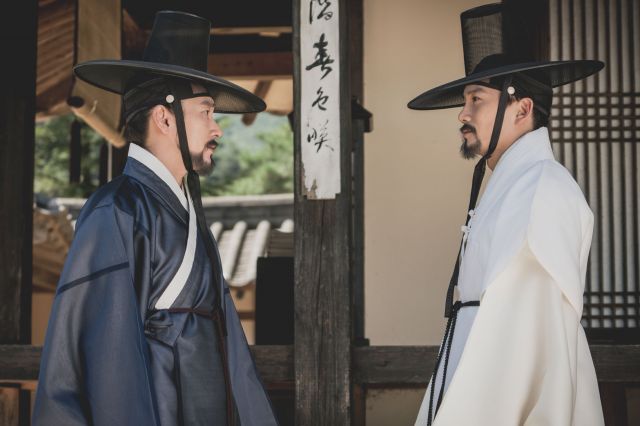 In the final scene of "Fengshui" we see elderly feng shui expert Jae-sang (played by Cho Seung-woo) recounting to a couple of guys in suits about how he and his fellow geomancer Ha-eung (played by Ji Sung) witnessed the destruction of the Joseon government over a bizarre dispute concerning royal gravesites. This epilogue really should have been the framing device. "Fengshui" has a transparently ridiculous storyline that makes a lot more sense if you know ahead of time that the whole thing is a metaphor for the late Joseon government's absurdly skewed priorities.

Don't get me wrong, I actually like feng shui as a general concept. There are some great establishing scenes where we watch the principals of feng shui applied to the real word. We see minor household problems solved by proper furniture placement. Better urban planning transforms a slum into a thriving marketplace. One character makes an excellent real-estate pitch entirely by accident simply by describing a certain house as having architecture that is well-suited to the surrounding natural landscape.

Alas, such amusing character building moments are few and far between as director Park Hee-gon quickly drags us into the midst of a royal conspiracy with frequent swordfights, bloody brutality, and dramatic horseriding. Given that geomancy is an inherently goofy and nerdy profession, it's hard to buy Jae-sang and Ha-eung as epic warrior scholars. Their credibility as protagonists is also hit by how we see that the royal conspiracy is willing to use brute force and senseless murder to solve minor nonexistent problems. How are geomancers supposed to fight against that?

They can't really, which is why the fight goes so poorly. Indeed, fighting itself is against the principles of feng shui, which is all about building harmony. This is why the elaborate schemes to abuse feng shui for personal gain have such short-lived benefits. The process isn't supposed to be violent. And again, given how late Joseon was a period of constant peasant revolts and foreign encroachment, royal burial sites are the last thing anyone should be using state resources to fight over.

But even granting this decent thematic point "Fengshui" does very little to properly build it up. We never see any of nineteenth century Joseon's more substantial problems. This makes the royal gravesite dispute appear to be the only major political issue going on at the time. The constant royal skulduggery is also terribly rote and generic compared to the geomancy, which is by far the more interesting aspect of the premise. But as the film drags on we get more royal conspiracy and less feng shui.

The lack of a decent sense of humor also hurts matters. Note how Jae-sang and Ha-eun manage to build up an entire team of highly skilled geomancers, most of whom never actually do anything. Seriously, the most I can remember about those guys is that one of them stutters a lot for exactly one scene. That's how starved any character in this movie is for any sense of distinction. All in all, "Fengshui" is a big disappointment.