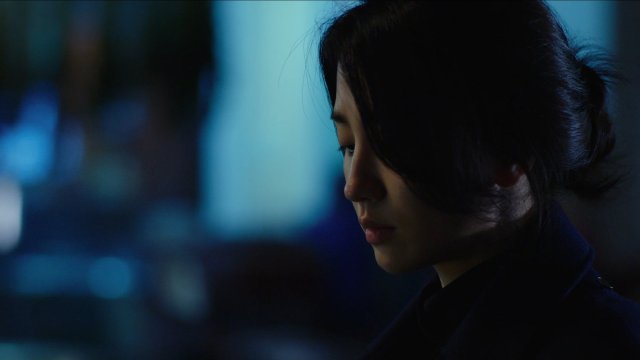 In one very brief scene that's easy to miss, Jeong-ah (played by Park Ha-sun) acknowledges that her pregnancy was not planned. Jeong-ah is a professional woman in her thirties and Jeong-ah's job is a crucial part of her personal identity. Being on maternity leave for a year has wrecked Jeong-ah's sense of self. So Jeong-ah struggles to find a means to take care of her infant son while still being able to go to work and interact with the only social life she has.

"First Child" is an astonishingly lonely movie. We watch as possible solutions to Jeong-ah's childcare problem are shot down, with Jeong-ah seemingly being railroaded into becoming a full-time housewife. Her husband Woo-seok (played by Oh Dong-min) is of especially little help. As Woo-seok sees it, they don't need the extra income because he's been working a lot lately and earning an extra salary. Incidentally, Woo-seok is clearly resentful that having a son has necessitated this change in lifestyle, although he doesn't vocalize this.

Woo-seok's ominously unsatisfying fulfillment of his husbandly duties is just one of the many darkly foreboding sentiments "First Child" expresses as just a sort of warning about how unpleasant domestic life can be. In a weird way, "First Child" reads as a much more harsh and cynical version of "KIM Jiyoung: Born 1982" which had similar subject matter. That is very much an odd way to phrase it, given that "KIM Jiyoung: Born 1982" is already a deeply cynical movie.

The main difference is that in "KIM Jiyoung: Born 1982" the problems leading to the title character's mental illness were clearly defined as just greater cultural misogyny. "First Child" has a much murkier approach. Jeong-ah's problems are an artifact of an inherently alienating capitalist existence that leaves her socially isolated outside of work and depending almost entirely on people who will care for her child in exchange for money rather than friendship.

This isn't to say that "First Child" is lacking in misogyny. Debatedly it might even exceed "KIM Jiyoung: Born 1982" on that front, as Woo-seok is portrayed in a horribly patronizing way that's fantastically unhelpful for solving any of Jeong-ah's subtler problems. Nor is Jeong-ah herself free of such superiority complexes. A major plot point revolves around the well-to-do couple admitting to some fairly casual racism, a situation that ultimately calls attention to their greater lack of empathy.

And that's the real greater concern at play in this film. The ultimate resolution doesn't come close to addressing any of these deeper issues of resentment. It's an open question what kind of mother Jeong-ah can really be, being forced into such positions of unwilling sacrifice. Yet Jeong-ah herself is increasingly unsure of what she really wants, as the situation at her job turns manipulative. Jeong-ah even tries to indulge one of her favorite activites from single life- only to realize in disgust that the gesture no longer resonates with her. Jeong-ah feels as if she can no longer feel. Paradoxically, this even works to prevent her from being properly angry.