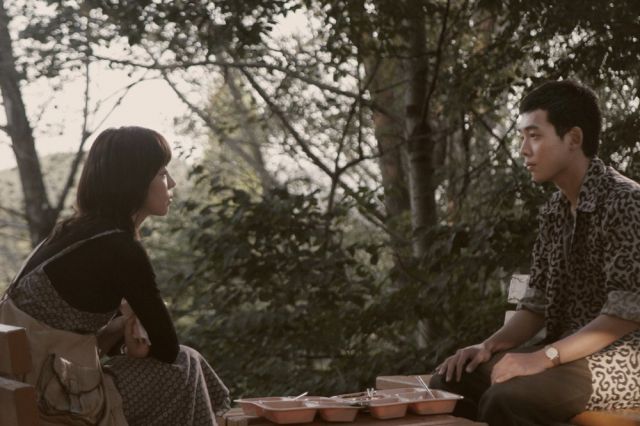 In 1979 Soo-yeong (played by Jung Kyung-ho) is a student going to university in South Korea. Not very much appears to be happening save for the occasional demonstration (violent or otherwise) to which Soo-yeong is paying very little attention. After a few conversations wherein Soo-yeong's general indifference to anything is discussed, Soo-yeong slowly meets other people and becomes aware of the fact that something isn't quite right at the university. But what?

It's legitimately very difficult to get involved in the mystery behind "For Eternal Hearts" mostly because the movie is so boring it took me an extremely long time to figure out that there even was a mystery. A bunch of weird stuff happens without context, Soo-yeong mostly fails to react to these happenings, and then the process repeats. Soo-yeong's disinterest in the plot at times borders on comical. After initially being freaked out by the appearance of a dead body, Soo-yeong apparently doesn't see much need to discuss this mysterious event with anyone.

These illogical character reactions are sort of justified by the plot twists which makes up "For Eternal Hearts", but plot twists alone do not a fine movie make, if only because it takes awhile for us to actually get that far and I, at least, was almost completely exhausted by that point. The main visually inventive parts here involve such craziness as playing billiards and falling off motorbikes. Those two scenes alone have more runtime than any of the explicitly supernatural stuff to boot.

Normally the problem that dogs a lot of science fiction is too much worldbuilding, either overexplained or underexplained. With "For Eternal Hearts", the supernatural worldbuilding is so indistinguishable from normal boring days on campus that I'm hard-pressed to think that there was even anything here to be explained at all. It's like the whole movie was an extended build-up to a joke. What if life wasn't boring, but rather weird? Wouldn't that be crazy and shocking?

Not really. In all fairness writer/director Hwang Kyoo-deok is going more for atmosphere than he is for actual story, so it does make sense that there's not much in the way of bombasticity. Even so, there are limits to what atmosphere can accomplish without some sort of engaging hook. Vague spookiness is not a hook. I'm having a lot of trouble even pulling any kind of metaphors out of "For Eternal Hearts", because metaphors usually involve some sort of action. "Eternal Hearts" is just a bunch of nothing lined up together.

Maybe they key lines in the setting. Perhaps we should not be bystanders to life- perhaps it matters more that we make a statement than that we simply act as passive observers to events around us. After all, what if in the end, we are only listening to the story because the story is really about us, and how we have lost our way in this world so we're trapped listening to meaningless nonsense in another one? That's an interesting idea, but at the base I have to acknowledge that "For Eternal Hearts" was a complete waste of time so...yeah, not recommending this one.