[HanCinema's Film Review] "For the End of Time" 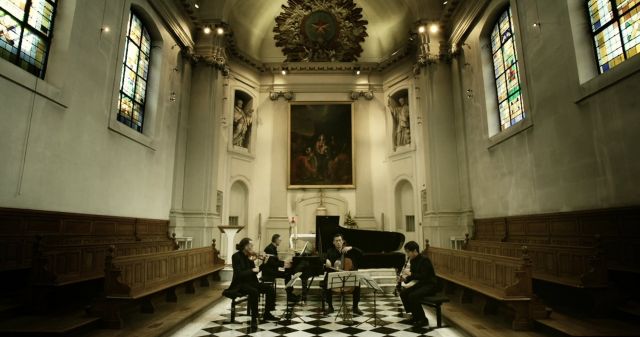 Nineteenth century Korea, remotely located as it was relative to the rest of the world, was not the subject of much work from missionaries. That changed, though, as Catholic conversion literature made its way from China to Korea, inspiring devoutness and martyrdom among the local population. Whe the Catholic Church learned of these clandestine activities, it sent French priests to the Korean peninsula in the hopes of teaching its accidental converts how to pray correctly- even as it doomed many of these same French priests to inevitable martyrdom, "For the End of Time".

In contrast to domestic religious films like "The Cardinal", "For the End of Time" is a much more externally research-oriented documentary. Director Kim Dae-hyeon delivers the story of early Catholic missionary work in Korea from a fairly secular angle. This much is by necessity- while records exist, even the local French churches these missionaries came from aren't very aware of what their nineteenth century alumni were up to.

That much is indicative of a very different time for prosletyzation, where there was no hope of an earthly reward. The specific actions of the priests and their followers should come as little surprise to anyone who's done much research into religious persecution. But by and large it's the unique elements that make the documentary interesting, like how the priests had to come up with a sily-looking yet plausible means by which to hide the fact that they were foreigners.

This is a story of missionary work on an extremely personal level, untainted by the unfortunate politics which has tainted Christianity in much of the world. At bare minimum "For the End of Time" certainly helps to explain why Catholicism enjoys such a strong reputation in South Korea compared to the rest of Asia. Even in North Korea Catholicism (allegedly) exists under limited official sanction- it's those jerkwad Protestants leaving Bibles everywhere that make the authorities mad.

...That was a bit of a pointless digression, yes, but even director Kim Dae-hyeon seems to realize that the subject matter in "For the End of Time" makes for a fairly dry history lesson, so the proceedings are livened up somewhat by the inclusion of classical music performances. Every so often these create a fairly picturesque atmosphere for visuals of nineteenth century style landscapes and interiors. Although really, these sections could easily have been removed and "For the End of Time" would have just been a fairly standard informational television documentary.

There's nothing wrong with that, of course. The history lesson provided by "For the End of Time" is interesting on its own merits. I just thought it was a little weird that a film of some prominence at the Jecheon International Music and Film Festival would have so little to actually do with music. Still, whether you're here for the religious history or the classical music, "For the End of Time" is a fairly constructive, pleasant, and informational use of time. Clocking in under seventy minutes it's also pretty time efficient to boot.

"For the End of Time" is directed by Kim Dae-hyeon

"[HanCinema's Film Review] "For the End of Time""
by HanCinema is licensed under a Creative Commons Attribution-Share Alike 3.0 Unported License.