[HanCinema's Film Review] "For Your Youth" 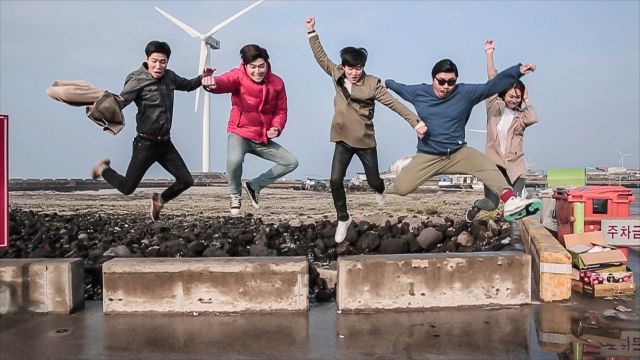 In this modern era where everyone records everything, no matter how obviously irrelevant or ill-defined in purpose, it was perhaps inevitable that a documentary like "For Your Youth" would appear that explicitly acknowledges it has no reason to exist. We start out with the pitch- just document the lives of these four musicians, who appear to have been chosen at random. And from there they just proceed to do...nothing. A trip to Jeju Island is cobbled together largely in the belief that something interesting might happen somewhere else. Support from the Jeju Film Commission may have also been an enticement.

"For Your Youth" falls into a category of what I like to call zen filmmaking, where the main purpose of watching the film is to ponder why it even exists at all. Who is this subject matter supposed to appeal to? Did some clandestine organization make this documentary for the purpose of proving that musicians are just like normal people? That they too, must eat, work, and play, the same as everyone else?

There's also the more mundane and amusing foibles, such as the occasional logistical screw-up resulting in the musicians having to wander from one objective point to the other in an even slower, more pointless fashion than usual. There's the posing for obvious staged photos. The general optimism that all the footage being created will somehow be edited into a watchable film. The negotiations for a place to sleep when necessary. And every so often, music.

The music is the main highlight, although for me at least, that's because I prefer music made by people found at random than by anyone famous. Ironically, while the music is good enough, I suspect the distribution issue was one of the reasons for the movie's existence. Even an independent film can usually manage to sell soundtracks. It's a surprisingly good economic model that can be exploited even by low-level musicians.

In all fairness, the basic genuine nature of "For Your Youth" is also a helpful factor. While some efforts are made to provide some form of a coherent overall story, it's clear that at some point the musicians in "For Your Youth" simply forgot that a camera was recording all of their actions at all. Note a late argument (really more a philosophical discussion), where participants slowly start to feel so awkward that they end up quietly leaving the table one by one.

Documentaries aren't really any more "objective" than any other form of movie. They always reflect some kind of political or commercial slant. Yet by being cognizant of the lack of material "worth" documenting, director Jeong-hoon-I achieves the rather perplexing goal of giving us an actual accurate look into what the life of a low-level Korean musician is actually like.

In this way the design of "For Your Youth" is practically anthropological. The content is useful more as a study tool than entertainment. But if that's what you're looking for, information rather than entertainment, "For Your Youth" is an all too rare glimpse into a profession and culture that's historically been treated with a tad more unknowable mystique than is actually appropriate.

"[HanCinema's Film Review] "For Your Youth""
by HanCinema is licensed under a Creative Commons Attribution-Share Alike 3.0 Unported License.