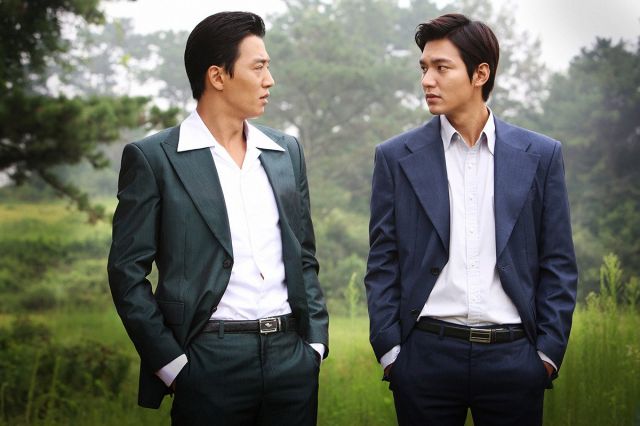 It's the seventies, and South Korea is well into an ambitious jobs program. First, bulldoze anything that doesn't look like a modern building and come up with skeevy business deals to build something respectable instead. Next, recruit the homeless people created by this process into either the police, the military or the mob. It doesn't really matter which- they're all pretty much the same really. Oh, you don't think that's such a good idea? Well shut your pie hole we have the guns. Now take this wooden plank and go beat up those democracy activists.

Jong-dae (played by Lee Min-ho) isn't really a character here so much as he is a guy who just goes along with the flow of history. Don't expect any kind of serious story here about how Jong-dae climbs the ranks. Heck, "Gangnam Blues" never even really manages to explain why he's so good at fighting. The entire film is mainly just a vehicle for Lee Min-ho to either brutalize or outright murder nearly every single person he runs into. And the worst part is that Jong-dae doesn't even have any fun doing it.

Seriously, the only real facial expression we get from Lee Min-ho here is just slowly building annoyance. He has a nice-paying job with a long term purpose that's at least theoretically not-evil. But every time the man tries to catch his breath yet another faction of gangsters pops out of the woodwork, necessitating yet another massive showdown. At one point Jong-dae even gets provoked by a guy who's not even in a gang at all. And Jong-dae is all, seriously dude? I could break you like a toothpick! How could you not know that?

"Gangnam Blues" would be a pretty funny movie if it weren't so incredibly violent. The moral thrust is just classic cliché- he who lives by the sword dies by the sword, friendship is what really matters, blah blah blah. Really, "Gangnam Blues" is more about visual style than it is about actual characters. The setting, gangsters and construction plot are mainly just flavoring for the visual spectacle. And it leaves a nice aftertaste.

There's violence indoors and violence outdoors. Torture in private and torture where everyone can see. Plenty of people get knocked out and dragged out, several characters lose their temper, most of them commit some sort of crime and pretty much all of them are gruesomely punished for it some way or another. Also there's a sex scene every so often. Don't worry- you're not going to feel too bad when any of these folks bite the bullet. Though you may squirm a little bit because geez, that's a bit more graphic detail than I wanted to see.

"Gangnam Blues" kind of reminds me of "Rough Play", in that both are obvious auteur films noteworthy mainly for having a lead actor in a role that differs radically from their public image. Is it any good..? Eh, sure. If you're a fan of Lee Min-ho, or a fan of violent Korean film in general, you'll like this. And even if you're indifferent to both these factors "Gangnam Blues" is still a quality of piece of work that makes for some pretty solid entertainment.