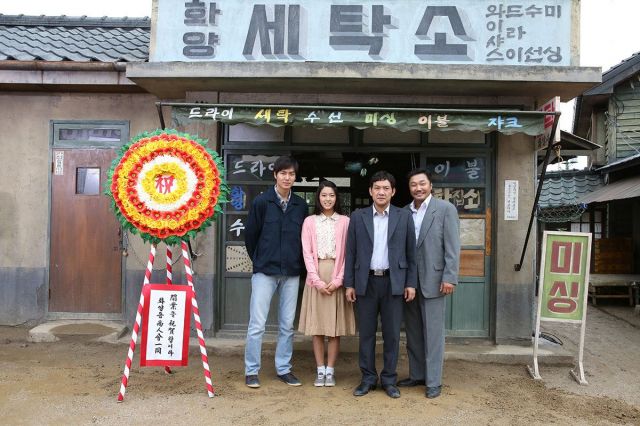 I'm a bit embarrassed as to the flippant tone in my original review for "Gangnam Blues". Everything I wrote about the movie was accurate. Most people liked to discuss Lee Min-ho's status as a massive star and writer/director Yoo Ha's status as a noir film auteur, so the absurdity aspect seemed like a more unique and interesting angle. But three years and a couple of rewatches later, I've come around to seeing "Gangnam Blues" in a far more serious and relevant light- as a tacit, dark, and mostly true origin story as to where the glitz in Hallyu Wave really came from.

At least, that's why "Gangnam Blues" remains so well-liked in the present day, when Lee Min-ho isn't in the news much anymore. A lot of what's helped this is that the political sensibilities of "Gangnam Blues" have aged quite well. When "Gangnam Blues" was produced and filmed, there was no end in sight to the conservative government whose main claim to legitimacy was that their predecessors had created South Korea's massive wealth in the seventies. "Gangnam Blues" is a reminder that the purpose of this development was never to enrich or even help normal South Korean citizens, but rather to empower the country's nascent class of gangster capitalists.

As seen in the movie, Gangnam was just a bunch of dirt farms back in 1970. Literally the name Gangnam just means "south of the river" and was not considered important or useful until the development scheme dramatized in the movie. And even that development scheme was just because a bunch of big roads were planned to be built in that area as part of a larger national highway project. I live in a similar neighborhood in Anyang that only even exists because of road construction. You can see the posters at city hall, noting how desolate that entire part of the city limits was before the development.

And that's why "Gangnam Blues" resonates so much. Nearly anyone in South Korea who looks at any of these historical plaques knows that a lot of development happened really fast, but there wasn't much discussion of how or why. Real estate is among the country's touchier political subjects, because gentrification can happen so quickly and abruptly that all of a sudden a lot of people can't even afford their former rent anymore.

Contrast that with the cheery upbeat image of Gangnam as presented in Gangnam Style, the viral video that is the main source of information most people internationally have of the Gangnam district. Of course, irony of ironies, Gangnam Style is actually intended as a satire of South Korea's more fashionable elements, and is obvious cultural criticism. To Koreans anyway. Most of these subtleties are lost on the more entertainment-minded international press.

...Who also tend to be ignorant of domestic political realities. Although really, even alleged political reporters are pretty ignorant when it comes to South Korean domestic politics, so that's no surprise. Remember what I wrote about the apparently unstoppable conservative government that was around in 2015? They're gone now. That modern political reckoning started with the 2016 Parliamentary Elections, and hit a fever pitch with the candlelight rallies demanding Park Geun-hye's impeachment.

Park Geun-hye's father, Park Chung-hee was responsible for the gangster capitalism policies depicted in "Gangnam Blues". Her legitimacy was founded on the notion that that the end justified the means when it came to these development schemes. The big joke was that both the means and the ends were terrible. People were brutalized in the short term, and in the long term fared little better.

That's also the entire narrative thrust of "Gangnam Blues"- Lee Min-ho's character goes from a street orphan to a mob enforcer, rationalizing his life choices as being for the greater good. Yet he betrays his father figure, is forced to fight his only friend in the name of capitalist competition, and even his sister figure turns out to be miserable as a bourgeoise wife because money can't actually buy happiness. The metaphor for modern South Korean life is obvious. All of a sudden that high suicide rate doesn't look so mysterious does it?

That's all just cultural context, and there was just too much of it to put in my original review anyway. "Gangnam Blues" is a pretty straightforward story, so it's not like these metaphors are essential to understanding what's going on. Even so, and even if this is obviously a little late, I thought you all might like to know. Those epic fight scenes aren't just fight scenes, they're all spectacle in terms of this narrative point. Any legitimately good movie with serious staying power does the same thing.