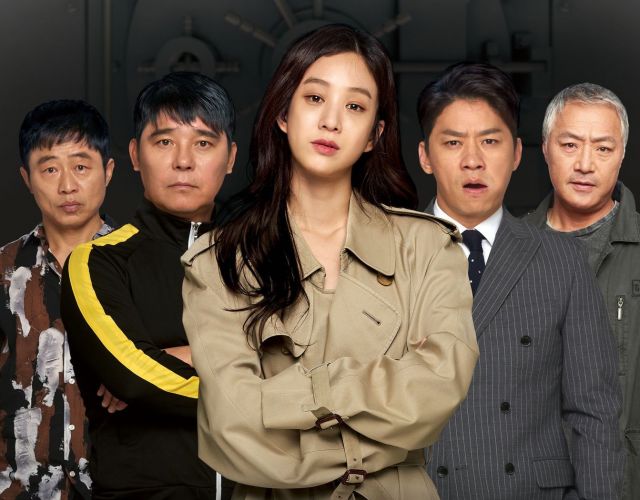 So-eun (played by Jung Ryeo-won) has a problem. Everyone in her apartment building has been getting ensnared in bad contracts from loan shark Min-wook (played by Jung Sang-hoon) and his gang of obvious crooks, so So-eun decides to take a stand against them. Neighborhood ex-cop Gyoo-cheol (played by Im Chang-jung) also insists on helping, though that ridiculous yellow track suit and subservient attitude makes him rather non-threatening.

Really, non-threatening is probably the single best word to describe "Gate" overall. This is a heist movie staffed by buffoons, most of whom are too stupid to even realize that they're in a heist movie. Several bad ideas for dealing with the loan shark problem are addressed and attempted before the entourage of main characters finally realizes that Min-wook is just as dumb as they are and can easily be robbed.

"Gate" is, compared to the typical heist film, characterized by its lack of complexity. In slicker movies, the bad guys have complicated vaults with like a dozen different security measures. In "Gate" no one bothers with those things because do you have any idea how inconvenient that kind of set-up would actually be in real life? The main innovation of modern banking is convenience. If your fake illegal bank can't at least have a pretense of convenience, it is a bad bank.

In screenwriting terms this realism does create a bit of a problem though. When heists are this easy, it's hard to create dramatic tension. Indeed, I worried about the main characters quite a bit more during the earlier part of "Gate" because Min-wook is a thug who will gleefully defy the letter and spirit of any agreement out of sheer spite. By the final act, though, he's practically comic relief, and the only villains who outrank him have almost no characterization.

The plot in "Gate" works a lot better if you think of it as a vehicle for delivering gags rather than storytelling in and of itself. Take the portion of one plan that involves indecent exposure, that goes wrong for predictable reasons. Or the extremely contrived accident, complete with overwrought acting. My favorite was the bit where one character has to call mom for help, in about the last situation you'd ever think to call your mom for help. The entire climax is just a series of wacky cornball moves that improbably cut off all possible obstacles to escape.

While this makes "Gate" a lot funnier than the typical heist movie, that's mostly because the typical heist movie is trying too hard to be cool to do much in the way of jokes. Still, the movie has a decent sense of humor, and the ensemble has pretty good chemistry. Their ultimate victory just feels too easy, is the main problem. There's more ambiguity about whether So-eun will ever make up with her ex-convict father Jang-choon (played by Lee Kyung-young) than there is about the actual heist. Yes, I am describing that plot point only just now in the antepenultimate sentence of this review. It's that irrelevant.