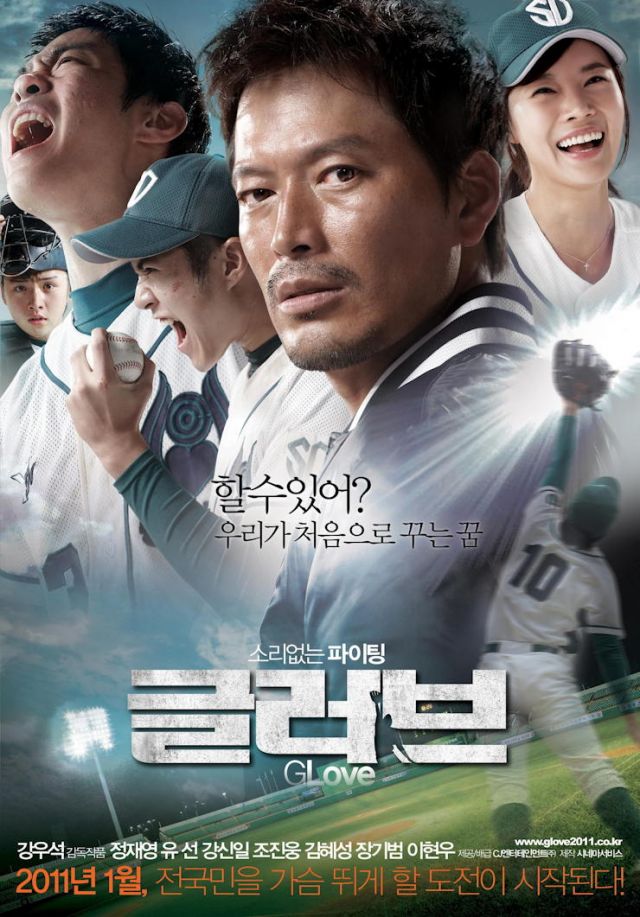 Kang Woo-seok's "GLove" does little and less to challenge the formula of a feel-good sports drama. The film was well received in Korea but international audiences will be less impressed by Kang Woo-seok's cookie-cutter approach to this true story. But despite its formulaic shortcomings, of which there are a plenty, "GLove" was still able to get its heart-warming message across the endless fields of sports clichés it had to traverse. I know I shouldn't, but I like it.

Pro baseball star Kim Sang-nam (Jung Jae-young) is selfish, egotistical, stubborn and is currently derailing his own career with drunken and disorderly conduct for which the public wants him jailed. His manager, Charles (Cho Jin-woong), is an old friend who bends backwards to the point of breaking to keep his professional career alive. Kim Sang-nam's latest outburst is the last straw and, in a last-ditch effort, he is sent to coach a team of hearing-impaired junior high students at a private catholic school while his manager attempts to pick up the pieces .

Western audiences will shun a lot of the melodramatic instances that tinge most of the film's rhythm but this is a culturally-conscious film that was never meant to satisfy any foreign viewership it might encounter. The baseball ethos has been cinematically pummelled and freshness is a challenge to any filmmaker willing to attempt the feat. "GLove" is not a film that breaks the mold but it adds an unmistakable Korean flavour.

If you can move beyond the flat characterisation and the film's predictability, there is a great sense of appreciation to be had as characters remain extremely likeable.  Na Joo-won (Yoo Sun) is exactly that as she mentors the boys and shows nothing but love for them and their happiness. Along with the school's vice principal, her efforts to care for the boys is sickeningly pure and will be quickly dismissed by most as unconvincing and staged beyond illusion. Yes. The strings are clearly visible with "GLove" and they are indeed the film's crux. It's a double-edged sword that will undoubtedly leave some loving and others yawning.

It's no masterpiece to be added to Kwang's filmography as he sets out to make a film that greatly differs from his previous efforts of "Moss", "Silmido", and his "Public Enemy" series. Perhaps the tonal considerations for this type of film were outside of Kwang's more natural cinematic sensibilities. But for all its lumps, "GLove" tells its story with a Korean spice that will be hit or miss with most audiences.