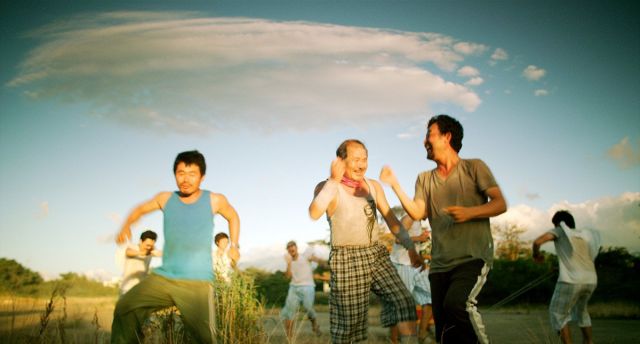 Have you ever wondered what all those street musicians do in their off-hours? Not the lonesome ones playing normal songs by themselves, the weird guys who form groups and do open air performances of unusually fluid genre fusion blends. Songs that aren't really about anything, they just sort of form an odd backdrop to the scenery and make you think about how wouldn't life just be peachy keen if we just lazed around doing nothing but write songs all day in wide open delapidated public spaces that kind of feel dirty and clean at the same time.

Actually, upon writing that I'm not sure I've ever actually seen a real life band like the one "Golden Chariot in the Sky". Evidently the film's pseudo-realistic effect was so impressive it managed to trick me into thinking it was real. And maybe it is real, who knows. I have no idea what kind of music they're into down in Jeju Island, but even though I've never been there the film certainly feels authentic enough about them. The end credits even have a helpful list of filming locations in case you want to check them out firsthand.

I must note, though, that Jeju Film Commission involvement notwithstanding, this isn't really an exploration of the happy fun sights around the island that tourists want to go to. By and large the band just visits abandoned areas and condemned houses, mostly because these are the locations where they're least likely to be arrested for basically living like bums. Musically talented bums sure, but they're still bums.

And the weirdest part of it all is that the backdrops actually are kind of inspirational. Jeju Island isn't that well-developed, so abandoned structures end up getting reclaimed by nature a lot quicker than they would be in Seoul. The result is a weird hybrid of greenery abounding ancient looking ruins that at most are probably just a few decades old. We're visiting lands of decayed dead dreams, so it's no surprise that everybody ends up riding around on a magical chariot.

Not literally, of course, but that's just the kind of movie "Golden Chariot in the Sky" is. These are the kinds of fevered dreams a person on drugs might come up with, except that we never actually see anybody do drugs throughout the movie. The inspiration here seems to come totally from the optimistic depths of their own worn out imaginations, and it's easy to see why they would end up coming up with something so basically light and carefree.

The plot? What story there is here is so laughably minimal it's hardly worth discussing at all. Everybody just sort of bums around the scenery for awhile singing songs until they finally stop, having apparently accomplished little in their lives except establish that life will go on, whatever the circumstances might be. The message isn't all that optimistic given what we see of the characters' rather unimpressive lives. Still, it's an intriguing enough one to probably warrant a watch.

"[HanCinema's Film Review] "Golden Chariot in the Sky""
by HanCinema is licensed under a Creative Commons Attribution-Share Alike 3.0 Unported License.