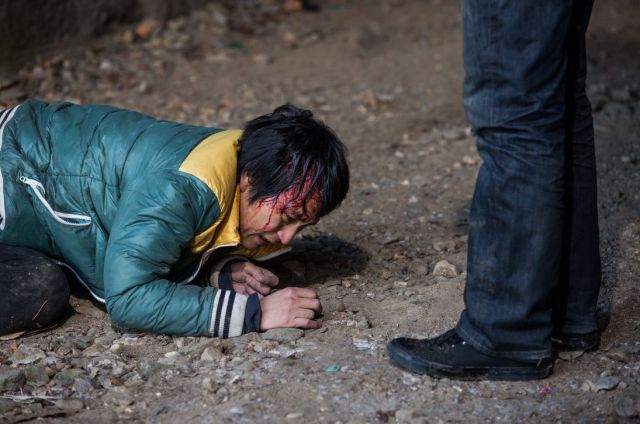 About the only interesting part of "Guardian" is trying to puzzle out for yourself the specific twist and turns behind the motivation of the villain. From the beginning the instructions we start hearing over the phone make very little sense. The mostly unseen antagonist seems more interested in terrorizing and harassing his victims than in actually engaging in anything that could be seen as direct harm.

Unfortunately the movie does very little in trying to piece together the motivations for the villain's strange game of ironic justice. Certainly, little hints are spread throughout which indicate the characters themselves have a reasonably good idea as to what's happening- but this only gets the bare minimum exploration. For the most part, "Guardian" follows the simple pattern of the villain giving an instruction, followed by the victim following the instruction, and then the process just repeats until finally we arrive at the last instruction, and the characters themselves finally figure out the unspoken implications that have, by this point, been clearly spelled out to the audience.

While following the movements in the plot is kind of interesting, none of the characters are really interesting enough to really warrant caring about. Aside from a few clearly defined personality quirks at the beginning of the story, from there it's just all about the plotting. And while the story is well-constructed, it lacks any kind of real heart to make the action particularly engaging.

The story might conceivably work if we view the characters as archetypes rather than actual individual people, but "Guardian" gives its audience the bare minimum amount of information necessary to prevent this from really working that well. The "crime" that the lead character committed is described in terms too hopelessly vague to make him work either as a character or archetype. There's just enough distance between him and the audience that I can't really process whether his sins are comparable to my own, mostly because I'm not entirely sure what his sin was.

This isn't a bad movie, really, it's just so perfunctory in its exploration of all the deeper elements of film that all we really get is a husk of storyline to sit through without any real flavor or joy to make the proceedings particularly interesting. This is a concept in desperate need of some sort of statement. Any kind of statement would do. As it stands "Guardian" is really just a movie about a bunch of stuff that happens.

It's a shame that the film ends up being such a disappointment, because it really is good stuff that happens. The story is extremely easy to understand, and the central mystery is well-enough constructed and alluded to that a mystery fan may well be able to guess the twist shortly before it actually happens. But the absence of any other kind of deeper, more intriguing commentary or style creates a very bland overall proceeding. "Guardian" is an extremely average film. It never at any point becomes exceptionally good or exceptionally bad. For a movie-goer that just wants to indulge in well-written mediocrity, the movie may hold some appeal. That's about the strongest praise I can muster for it.