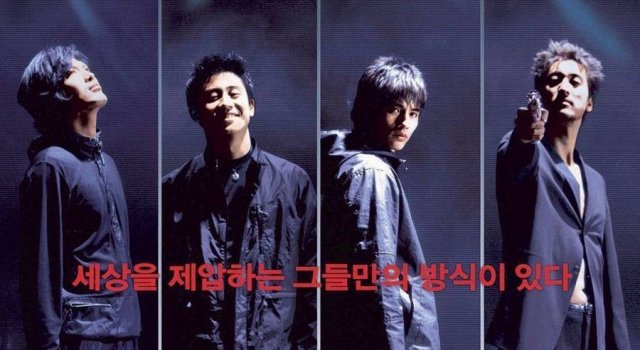 In the extremely cool opening setpiece to "Guns and Talks" a team of professional hitmen played by Shin Hyun-joon, Jung Jae-young, Shin Ha-kyun, and Won Bin meticulously set up a bunch of seemingly unrelated steps in a complex assassination plot. Their movements are perfectly set to some very hip electronic music. With every beat they step closer to the climax until finally everyone is dead and the asssassins themselves are mostly out of the way. Then they go home and we find out they're idiots.

"Guns and Talks" is a movie of a very specific time period- the cultural environment of the nineties when all the cool filmmakers were making assassin movies, typically with some kind of quirk to emphasize how special and different these specific assassins were. With "Guns and Talks" writer/director Jang Jin deliberately plays this idea for farce. Instead of having some kind of noble life philosophy or code, the four lead characters are just normal guys with very specific talents who stumbled into the profession because they didn't have anywhere else to go.

What's more, their whole attitude towards the assassinating profession in general is purely functional. The two major subplots of the movie's first off actually consist of the assassins coming up with unconvincing excuses not to kill people. These sequences, involving a high school student and a pregnant woman, are completely logical from a standpoint of normal ethics. They only come off as ridiculous because of the specific way assassins are fetishized in movies.

So while the assassins can acknowledge that killing these specific people is, in fact, morally wrong, at the same time they don't not see any contradiction with their decision to go forward with the elaborate Hamlet setpiece that climaxes in the second half. Why? Well, mostly because it looks cool. That's their real code- they only kill when they need the money and the plan is an unnecessarily complicated challenge. Amusingly enough this is also the actual screenplay logic behind nineties assassin movies whatever the textual motivation is stated to be.

Prosecutor Jo (played by Jung Jin-young) is the most explicit conceptualization of this idea. He starts investigating the assassins mostly out of curiousity. He is astonished by their technical mastery, but is slowly disgusted to learn that they are crude sentimentalists. Which is not to say that Prosecutor Jo is a particularly dignified person. He's a bit of a thug, really. Not that this makes assassinating people more noble by comparison, Prosecutor Jo is just a sad reminder about how cops are more likely than not to have petty motivations.

But I would caution against trying to read too much into "Guns and Talks" storywise. Huge portions of this movie are just writer/director Jang Jin showing off the latest in wacky camerawork and musical synchronization. Oh, and don't forget the silly gags. "Guns and Talks" has a particularly impressive twist on the well-worn "main characters watch themselves on the news" trope- an explicitly narcissistic fantasy that takes on weirdly high school styled dimensions in this context.