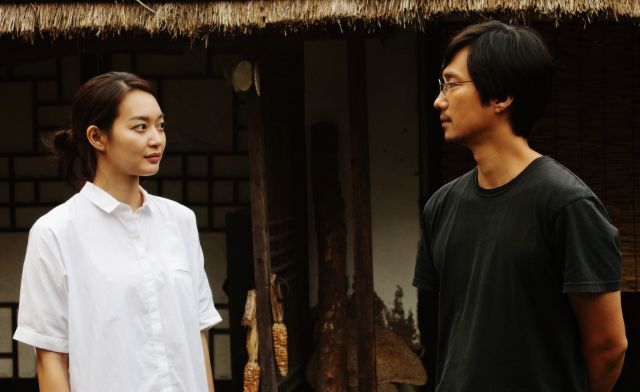 A long time ago, Gyeongju was once the capital of the Silla empire, which eventually consumed the other ancient kingdoms on the Korean peninsula before inevitably falling into decline. Today it's a relatively sleepy tourist town, noteworthy mainly for an unusually large amount of greenery. The city has beautified since ancient times, mostly because ever since all that exciting stuff happed way back then, well, life has moved on.

That metaphor is the essential message learned by Choi Hyeon (played by Park Hae-il), who arrives at Gyeongju hoping to make sense of his past but ends up spending the next two hours just sort of sitting around in random parts of the city. Not even famous parts, really. The main facts director Zhang Lu emphasize here are that Choi Hyeon is alone in a very peaceful place and, while not exactly bored, it's clear he doesn't really have any good idea what to actually do on this holiday.

Choi Hyeon is forced to acknowledge that the people in his past have moved on without him. Once more, people in the present really have absolutely no interest in the man's life story. They make sometimes ridiculous assumptions about him, never really probe him for meaningful information, and otherwise just live life like normal. Ironically, it's actually Yoon-hee (played by Shin Min-ah) whose backstory is seriously explored, and she's just a woman that Choi Hyeon happens to end up spending time with.

Don't confuse that for a romantic storyline, by the way. What's going on with these characters is a lot more sad and permanent than that, even if it feels at points like these two may have made a more permanent connection. The scenery and space in "Gyeongju" exists mainly to emphasize the fact that there's so much going on in the world, and it's going to keep going on even if the names and faces change.

This isn't really a particularly uplifting message, even considering the decision Yoon-hee makes at the end. The empty world of Gyeongju calls to mind the spirits of ghosts creating a very strong impression that looking back on these old nostalgic times isn't any substitute for the actual experience, and that it's the course of real life which makes reliving the past impossible. Yes, it's cute to see students impulsively kiss in a public place. And motorcycles will always be cool. None of it has anything to do with you, though.

"Gyeongju" definitely provokes some emotions. What makes the film difficult to process is that these aren't really positive or negative emotions. They just are. After an extended nighttime romp, Choi Hyeon and Yoon-hee start to see the brightness of a whole new day. And I don't mean that positively. The dawn is really really bright. I had to squint and for awhile I was sure Zhang Lu was screwing around with the lighting somehow. No, that's just how it feels to experience a new day. No sense of wonder or renewal just, well, things have changed again. Time to get back at it.

"Gyeongju" is directed by Zhang Lu and features Park Hae-il and Shin Min-ah.