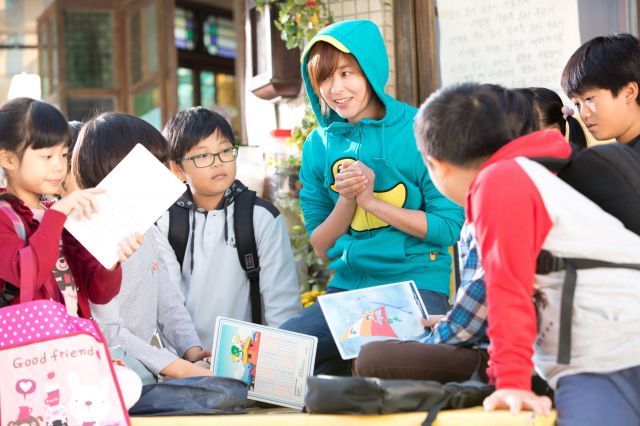 What really makes "Happiness for Sale" stand out is the excellent camerawork and set design. From the very beginning, we're treated to a lovely artistic rendition of what the titular stationary shop looks like. But even before we get there, the camera has informed us about the bedraggled nature of Mi-na's life nearly as much as actress Choi Kang-hee's own acting has. The sets are packed with interesting background details that go by just too fast for us to appreciate them- just as Mi-na is too bedraggled to notice anything except what, at that particular moment, gets her the most disproportionately angry.

The plot is pretty standard. Mi-na has to escape the wanton bustle of city life to appreciate more rustic, personal surroundings via the device of her father's stationary store. Interestingly, there are no villains. The city life itself isn't portrayed as negative- rather, it's the way Mi-na has ended up reacting to it that has really wrecked her personality and turned her into an emotional wreck. Mi-na's journey is less about romantically appreciating the stationary store in nostalgic terms as it is learning to be more forgiving of people and not lashing out.

Mind, "Happiness for Sale" is still an extremely nostalgic movie. But it wisely avoids the totemism of appreciating the actual objects of childhood by instead valuing the experience. While the stationary store is loaded with cultural references, they're valuable mainly for their emotional significance rather than their literal ones. An old arcade cabinet game of Street Fighter II plays a significant role in the plot. However, it is important mainly as a narrative device for accomplishment, as characters strive to achieve the best score.

Still, it's not all sunshine and roses (though director Jeong Ik-hwan does an excellent job integrating them into the camerawork). Parts of childhood really stunk, and "Happiness for Sale" really drives this with the flashbacks to Mi-na's own school days, where was mercilessly bullied thanks to the unfortunate structuring of the stationary store's name. But like so much of her general characters, these memories themselves are reflective of her current personality. Later on in the movie, we see a whole treasure trove of adorable reminisces that she'd quite simply just forgotten because it's been so long since she had that kind of friendship.

I also really appreciated the restraint in the storytelling. The movie focuses primarily on Mi-na's journey as a mean, unlikable person to a cheerful one who responds to conflict in a much more proactive, useful way. There are several subplots, but most of them are cleanly resolved fairly believably. Only one subplot is really left hanging, and I think the decision not to explore it fully was a wise one on the part of the screenwriter. Ultimately, Mi-na has to make the choices she does for her own sake just as much as the children she befriends at the stationary store.

"Happiness for Sale" is not an especially innovative or inventive film. But it has excellent camerawork, beautiful set design, good performances, a charming script, likable characters, and is just overall extremely well-done. This is a great mainstream movie that hits all the right notes for everyone in the family. I look forward to what director Jeong Ik-hwan has in store for us in the future.

"Happiness for Sale" is directed by Jeong Ik-hwan and features Choi Kang-hee and Bong Tae-gyu.