[HanCinema's Film Review] "He Who Loves the World" 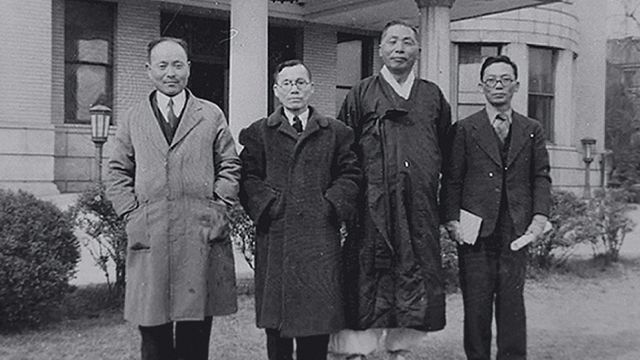 Son Yang-won was born in 1902- auspicious circumstances to be sure, for anyone familiar with Korean history. From the very beggining, "He Who Loves the World" makes it clear that there was no shortage of people in Son Yang-won's time who needed help and ministering. Even today it would seem that director Kwon Hyeok-man had no trouble finding poor and downtrodden people who needed a helping hand from Son Yang-won. This is all the more remarkable considering that the man died in 1950. The testimonies here are almost exclusively from octogenarians, or older.

History books tend to emphasize that the great men of history were the ones that did things on a global scale. Well, the twentieth century had no shortage of those so-called heroes. Son Yang-won, by contrast, was one of the quiet men who simply tried to clean up the messes made by cycles of war, ideology, and brutality started by those great men. What's remarkable about his story is just how constrained the man seems to be. Son Yang-won's followers would have done whatever he asked them to- but all he ever asked them to do was be pious and humble before God.

"He Who Loves the World" is a constant reminder of what life must have been like back then for the people who just wanted to stay out of the way. Watching the interviews, it's clear that while everyone was greatly touched by Son Yang-won's devout attitude toward forgiveness, he was, in many ways, a product of his time. These people lived in an era where they had little to have faith in outside of, well, faith. Nationalists might talk a good game, but even they recoil at the sight of the hideous.

Not Son Yang-won. Time and again he confronts the worst while hoping for the best. Kwon Hyeok-man wisely avoids actually reenacting old events of history, instead relying on simple animation to portray, at times, the isolation of the horrific unknown, or the joy of being reunited with the prospect of love. Son Yang-won simply did not have it in him to hate. There's a personal simple beauty in that which really could only be accurately reflected in the deceptively simple looking artwork of the film.

Non-believers may well find Son Yang-won's devotion, in the face of all available evidence of the essentially vile nature of the world, to appear bizarrely naive. He runs afoul of the Japanese colonial authority, not for actively fomenting rebellion, but by refusing to obey an arbitrary rule. He preached forgiveness against men who committed a horrible crime against him. He finds happiness in the most horrific moments, because apparently it's enough for him to know solace in the Kingdom of God.

This might all seem crazy. But compared to what? Despair? The smug superiority of moral correctness? The leaders who massacred villains for the greater good? Son Yang-won's story is a reminder for the rest of us that there are some things in life we should not aspire to. Considering his sermons, one is often reminded of the Christians of yore who would gladly be devoured by lions for the sake of spreading their message. What could have possibly given Son Yang-won the courage to strive for hope at times like this? That's the question "He Who Loves the World" aptly and heartbreakingly answers.

"[HanCinema's Film Review] "He Who Loves the World""
by HanCinema is licensed under a Creative Commons Attribution-Share Alike 3.0 Unported License.