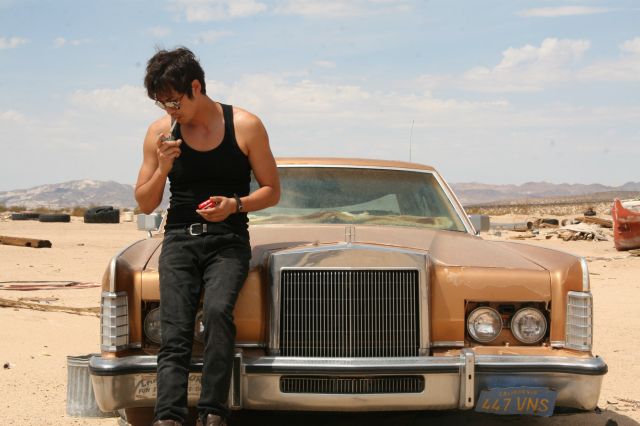 One of the more uncomfortable parts of Korean culture for me is the way it tends to fetishize how wonderful life would be if people could just go to America. I'm not sure what many Korean people think American life is actually like, but we tend to treat each other like garbage, and the immigrants even worse than that. So it goes for John (played by Kang Ji-hwan). He's a young Korean man living in America who looks and acts, well, kind of like a petty low-class bum. His only really selling point is youth, and even that's not going to stick around for much longer.

Personally speaking, "Heartbreak Hotel" is a pretty weird movie. I'm from the American southwest, and I've long since gotten used to the fact that even though this is where most filming happens almost no media actually resembles the local landscape. In all fairness this is because most of our local landscape is either endless rows of ugly gentrified bright lighted buildings, or empty deserts filled with absolutely nothing interesting. And, well...that's pretty exactly what "Heartbreak Hotel" looks like I'm afraid.

It's also the rather dreary emotional backdrop for the film at large. John lives a life that's occasionally punctuated by violence or sex, but for the most part is just pointless. John is so lacking in meaningful life choices that he signs up for work in a gang mostly because no other prospects exist. Don't let the superficial similarity to "Gangnam Blues" fool you- the worst part of John's existence is that he doesn't even have anything that can reasonably be called a serious lifelong dream, let alone infrastructure dedicating to actually trying to help him accomplish some sort of long term goal.

In this way the tone is actually quite authentic to the rather unfocused aspect of American culture that still lingers to this day. Unfortunately I suspect most native English-speakers will probably get hung up on the less-than-perfect spoken English that peppers the dialogue. Although really, this is exactly the kind of idea "Heartbreak Hotel" is criticizing in the first place- the notion that random Koreans can show up in the United States and practically be running the place in a few months just on the strength of their race's work ethic.

As is explicitly pointed out at one point, "Heartbreak Hotel" is a movie about the American dream, and the slowly crushing reality that it's really just a neverending line of heartbreak. It's hard to really feel bad about the way John loses friends and opportunities because he never really had any of these things. Life, for him, is just a long half-hearted scheme that ends about as purposelessly as it began.

I really do need to note that, even aesthetically, "Heartbreak Hotel" is fairly grim and unpleasant. And I personally wouldn't even consider it a particularly noteworthy example of a meaningfully depressing film. For me, the main interesting bit here is the way the film tackles the Korean fetishization of American culture and the way it lines up with reality. Outside of someone with an interest in that rather specific theme, I'm not sure there's that much to really recommend here. Well, I guess Kang Ji-hwan puts in a decent performance, anyway.