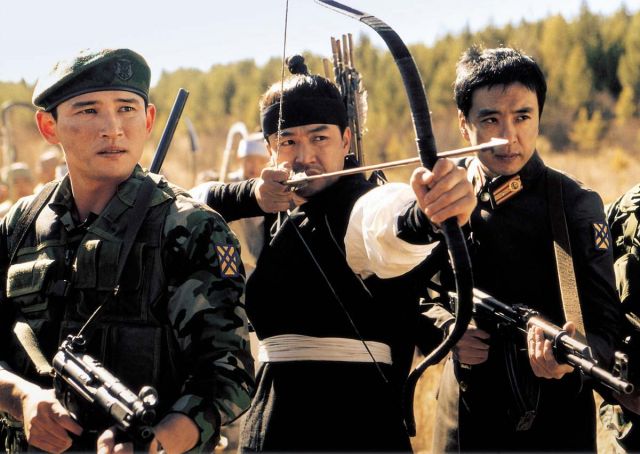 In the modern day (technically ten years ago, since that was when the movie was made) North and South Korea are at a diplomatic impasse regarding nuclear weapons, and an ill-advised mission results in a small group of armed combatants from both countries meeting on hostile terms. Then something weird happens, and the whole motley crew is forced to admit that in the new situation, they have something more in common with each other than anybody else they can find. And that something is mostly their ability to stubbornly insist on arbitrary rules.

It's actually quite a nice twist to the usual story of the modern day person transported to archaic times. The Joseon-era people our modern-day heroes run into are, for the most part, concerned with their own survival. One man in particular turns out to be amazingly important in the long run of history- and even he seems to eschew martial discipline just for the sake of general sneaky shenanigans.

After the introductory portion "Heaven's Soldiers" is mostly a comedy of errors along these lines. Even though the North and South Korean soldiers have obvious common cause to try and get home alive without utterly wrecking history as they know it, frequently they bicker over silly plot points. It takes a genuine moral crisis for them to get their act together and actually use their martial discipline for something useful.

Note that it's a moral crisis- not a political one. In the most basic possible terms, "Heaven's Soldiers" is a movie about modern-day Koreans who transcend these differences to act in the most noble virtues of their race. What each of the soldiers determines is that, whatever their increasing political differences may be, as Koreans, they can't give up on their own people. Having spent the earlier portion of the film in petty argument, ultimately they band together for the sake of true honor- and that much transcends arbitrary rules.

It's a similar overall plot thrust to "The Admiral: Roaring Currents". Which is appropriate, given the context of the ending. And I imagine that those of you out there who are a little recalcitrant about Koreans being just a tad over patriotic will probably locate plenty of faultfinding here too. The story isn't terribly a complex one, and its emotional resonance mainly comes from the self-esteem knowing that we, like the heroes, are capable of making the right choices if that's what it comes down to.

In any case the proceedings are definitely a lot of fun. The ensemble cast is excellent, and several of them have deservedly moved on to much more prominent careers in the modern days, even if only as memorable character actors. They manage to move seamlessly from the more human aspects of soldiers stuck in a somewhat comedic rut to guys who are willing to take the short-term view because, well, what's the use of thinking long-term if the short-term sucks? This makes for a fairly strong overall product that I can heartily recommend.