[HanCinema's Film Review] "Her Husband and His Wife" 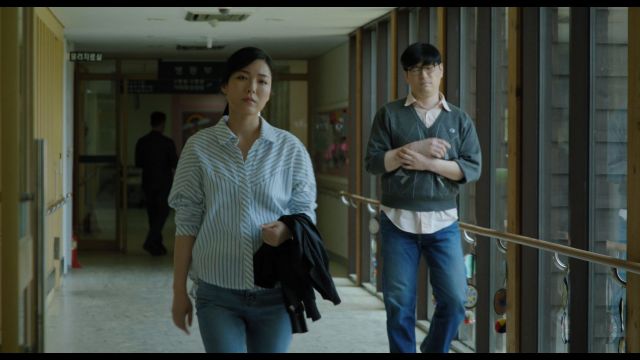 Joo-mok (played by Lee Sang-hyun) is a ballet instructor. As a man, this sometimes makes him idly wonder if he is sufficiently masculine. This is especially a problem since Joo-mok's wife Soon-jong (played by Go Ae-ri) is a tough-as-nails police detective- the kind that chases down suspects and knocks them to the ground personally. Interestingly, Joo-mok's agitation is mostly abstract. He has no apparent self-confidence issues except when it relates to his wife. The guy drinks soda while his buddies drink soju for pity's sake.

While this probably sounds like a pretty straightforward premise for a romantic comedy, "Her Husband and His Wife" has a somewhat more complicated goal than just to act as light entertainment. Apparently, the entire movie is just a thinly veiled advertisement for marital counseling. Not, like, a specific marital counseling service or anything. I mean you can go to the church Joo-mok and Soon-jong go to if you really want to. It is listed in the credits.

But the point being made by "Her Husband and His Wife" is far more cerebral than that. The argument presented by the movie is that even after a decade or so of marriage, it is perfectly normal to suffer regular communication breakdowns with your spouse. The solution to this problem is never to do anything so foolhardy as, say, look for another partner. The prospect of Joo-mok having an extramarital affair is hinted at pretty early on in "Her Husband and His Wife" although ultimately nothing comes of this plot point.

Surprisingly little is also made of the dramatic bungee jump incident, and Joo-mok's subsequent strange behavior. That's because the bungee jump is, we finally discover, largely symbolic of Joo-mok (and Soon-jong) coming to terms with the fact that they aren't the same people who met in college and fell in love there. There's nothing shameful about being a male ballet instructor or a female cop. Fundamentally, Joo-mok and Soon-jong are larger than the sum of their parts. That's why they're together romantically.

We can see that in their chemistry. It's not really lovey-dovey chemistry based on eroticism or anything like that. Rather, Joo-mok and Soon-jong constantly get on each other's nerves, and constantly complain about each other to their friends and families. So in a way, they are always on each other's minds and in each other's hearts. Their's is a surprisingly powerful bond that somehow only becomes stronger the more petty disagreements they get into.

While the comedy in "Her Husband and His Wife" is fairly light, the timing is very good and ultimately, the movie as a whole works mainly because the characters are so relatable. Even the more wacky situation comedy elements come off largely as just normal adults trying to make boring everyday life more interesting for themselves. "Her Husband and His Wife" is a movie about coming to terms with constant minor conflict as just being a sign of normalcy. I can actually get pretty into that idea, so I would recommend watching this movie if you ever somehow get the chance.

"Her Husband and His Wife" is directed by Joo Mok and features Lee Sang-hyun, Go Ae-ri, Jung Sun-chul and Jung Seo-in.

"[HanCinema's Film Review] "Her Husband and His Wife""
by HanCinema is licensed under a Creative Commons Attribution-Share Alike 3.0 Unported License.