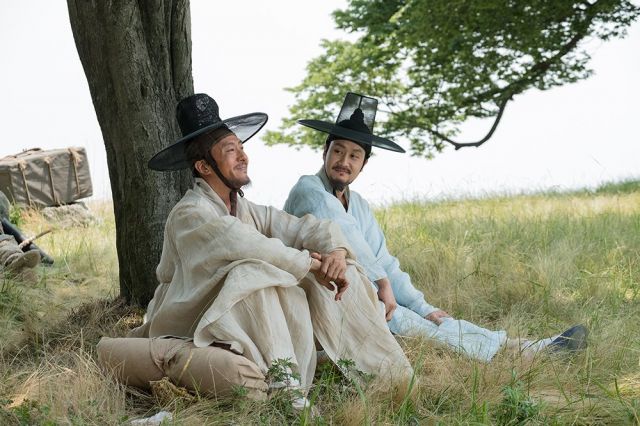 The story of Heung-boo and Nol-boo is a traditional Korean folk tale about a couple of brothers, one rich and mean, the other poor and well-meaning. One day the poor brother gains his good fortune through a bird that rewards his kindheartedness with a magic seed. Obviously the magical parts of the Heungboochun were made up. But the class conflict elements behind the story were no doubt influenced by real life. "Heung-boo: The Revolutionist" posits Heung-boo (played by Jung Woo) as being a popular nineteenth century author. The film then depicts where the idea came from, and how the story was received by the public.

Far from the neurotic lovable genius that is usually the main character in stories about writers, Heung-boo is actually portrayed as being of relatively little importance to his own masterwork. The real heroes of the Heungboochun, "Heung-boo: The Revolutionist"" would have us believe, are the lower class Koreans whose lives inspired the story. The author, then, matters much less than the cultural context.

Unfortunately since Heung-boo is the main character of "Heung-boo: The Revolutionist" the movie is forced to focus on his largely peripheral experience of the story's phenomenon. So in order to justify Heung-boo's presence as lead character, "Heung-boo: The Revolutionist" has to devote a lot of time to Heung-boo's backstory, and his actual brother Nol-boo, from whom he has been separated for quite some time. Hol-boo and Nol-goo's real story bears little similarity to the folk tale that bears their names.

Apparently the more direct inspiration for the story are wise cultural leader Hang-ri (played by Jung Jin-young) and his evil brother Hyeok (played by Kim Joo-hyuk) who has a position in the royal court. Heong-boo has to keep the inspiration a secret lest Hyeok retaliate for having discovered that the popular folk tale is actually a personal attack against him. Hyeok is a pretty evil guy, so this makes sense. It was less clear to me how Hang-ri felt about Hyeok using the brothers as inspiration, considering one of the main important themes of the folk tale is brotherly loyalty.

The excessively complicated plot of "Heung-boo: The Revolutionist" does a lot to undermine what I had initially thought was a pretty straightforward premise. The movie opens up with a subtitle emphasizing its connection to real history. From there I was expecting a relatively subdued storyline. If Heong-boo was a real person, there would be an obvious limit to the wacky shenanigans he could get involved with.

Instead come the climax we have this huge confrontation at battle at the royal court and it's just wish fulfillment. By the way Hyeok and his followers turn out to be apparently the only evil people in the entire Joseon government. That's just silly, especially when we consider that the actual nineteenth century Joseon collapsed in part because of constant peasant rebellions. Granted, the original folk tale also concludes with obvious wish fulfillment- but you can't claim to be making a realist nineteenth century Joseon era film and then give it an unambiguously happy ending.