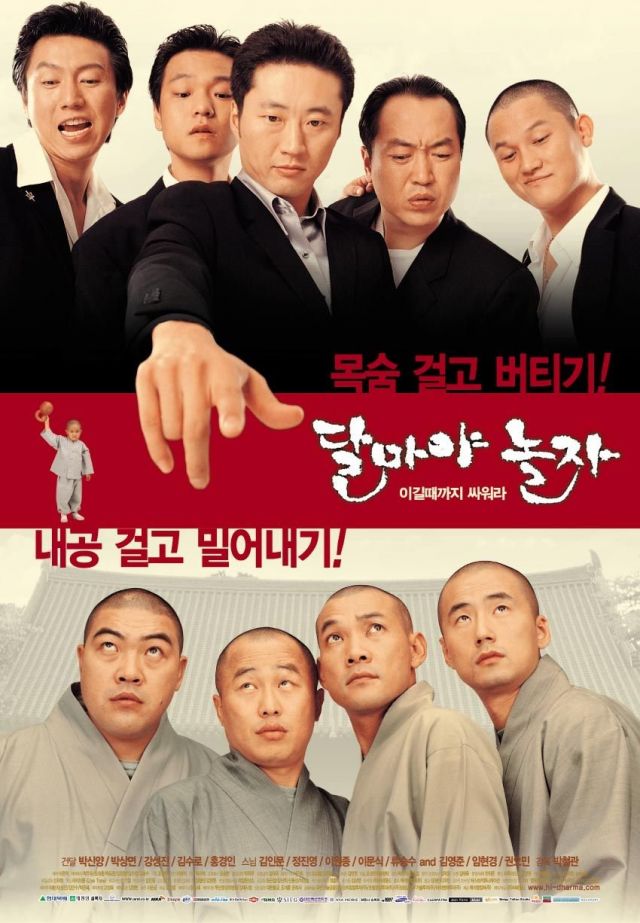 Jae-gyoo (played by Park Shin-yang) is a gangster sub-boss whose unit gets sucker-punched in the opening minutes of "Hi, Dharma" by a rival gang. Having only barely managed to escape that situation with their lives, and lacking reliable telephone access, Jae-gyoo's hang is forced to hide out at a Buddhist temple. And from there, the story of "Hi, Dharma" is simple character clash comedy. They're gangsters, the other guys are monks. How will they ever get along?

The sheer simplicity of the story in "Hi, Dharma" that's easy to like. Even if you're not a film critic it's easy enough to guess that at first the two groups will fight, then they'll start to grudgingly like each other, until at long last a final conflict arises which requires each group make personal sacrifices in order to save the other. The contrast being, of course, to the sacrifices that had to be made when they were fighting each other.

Jae-gyoo and crew are a mostly family-friendly group of gangsters- a relic of a bygone era before Korean gangster movies were required to have constant gratuitous violence. They're cute and inoffensive to the point that even when one of the monks ends up turning violent it doesn't feel like that big a deal. While this makes for simple fun comedy material, the transparent nature of "Hi, Dharma" is such that there's little if anything to discuss in terms of broader theming and the like.

Instead, there's subtle background elements. The temple looks really great, and it's exactly the kind of temple you can find scattered all around the Korean peninsula. Large enough to be semi-elaborate, yet small enough to feel fairly intimate. These are the kinds of temples where most real Korean Buddhist monks hang out, far away from the more touristy sites, never expecting much in the way of visitors because they're so far off the beaten path. That's one major factor preventing Jae-gyoo's from leaving, is just that they have no idea where they are.

It's not only the visual aesthetic that conveys this sense of distant tranquility. The monks also come alive as real people, which makes sense because monks are in fact real people, and rank is frequently just a designation of who can keep calm and cool in a crisis situation. Like when gangsters invade a temple and demand they be allowed to hide out there for awhile. The head monk (played by Kim In-moon) is a model of aspiration on this point.

"Hi, Dharma" really isn't any more that the sum of its parts, although with properly set expectations that's certainly enough on its own. Think about it. The big deciding point for the midway conflict hinges upon a simple riddle. Like any good riddle the answer is obvious once you know it, but until then brute force and metaphysical thinking are the immediate fallback responses. I mean really, why bother? Whether the game is gang life or Buddhism, getting along with other people is a fairly worthy goal to aspire to.