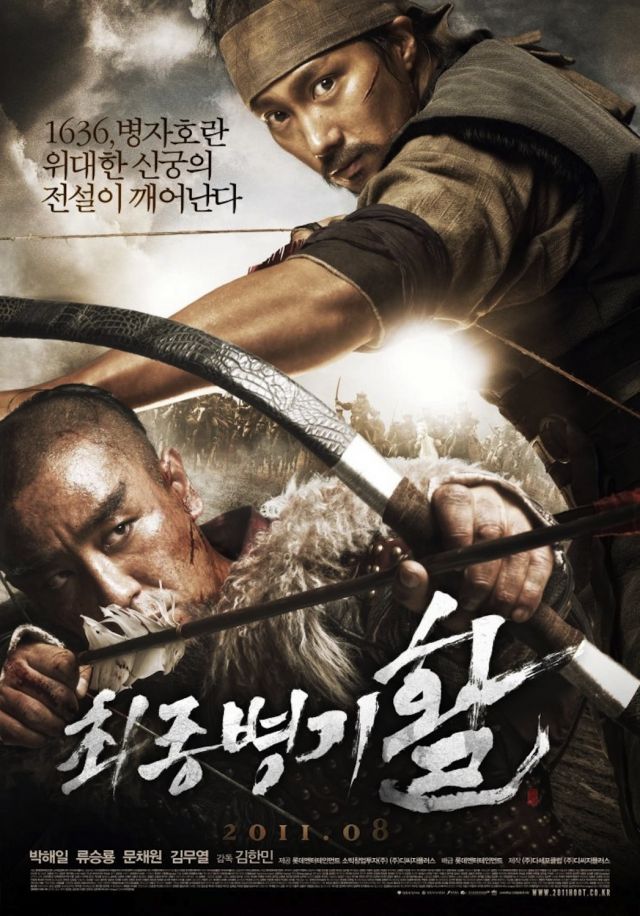 2011 has produced a range of successful Korean films that have captured the public's imagination, tugged at their heartstrings, caused a few laughs, and asked some serious questions. Although the year is not quite done, the big films of the year have largely had their say at the box office. This week I wanted to take a look at the top domestic films of 2011 and see just what type of films captured the public's interest in 2011.

Kim Han-min's "Arrow, The Ultimate Weapon" was released in the second half of the year and currently stands as Korea's most successful film of 2011. With 7,459,939 admissions to its name, this historical action piece edged out Kang Hyeong-cheol's dark horse stunner "Sunny - 2010". "Arrow, The Ultimate Weapon" has some 1,231,639 more tickets sold than last years champion "The Man From Nowhere". The film also received a string of awards locally from the 48th Daejong Film Awards and the 32nd Blue Dragon Film Awards. Some of these included Best Actor (Park Hae-il), Best New Actress (Moon Chae-won), as well technical achievement awards for its sound and visual effects.

"Sunny - 2010" came out of nowhere to capture the hearts of many with its warm tale of remembrance, friendship, and all round positivity. Kang Hyeong-cheol for me has produced the most important film for the industry as it moves forward. The film was inspiring and choose to personalise Korea's past with a hopeful and optimistic charm. The filmmakers shown great ability to make ethical decisions with the subject matter and in the process offered up almost a counter-narrative on historical remembrance in Korean cinema.

Kim Seok-yoon's "Detective K" dominated the early quarter of 2011, shinning through with an impressive start to the year's releases with 4,795,460 admissions. While the film itself was not faultless, it jumped started the public's response to the cinema circuit as the crowds came in to support this historical crime comedy. The first half of the year didn't exactly impress, but "Detective K" stood out and was incredibly well received.

Probably the most controversial film of the year has to be Hwang Dong-hyuk's "Silenced". Released at the end of September, the film ignited a furious response from the public the incidents of abusive and violence contain within. The school itself was shut down, buckling under public pressure for justice. There were other films that were also based on unsolved crimes, such as "Children...", but Hwang Dong-hyuk's feature had an astonishing ability to cause ripples through the media and public alike.

Lee Han's "Punch" is still currently on circuit and is looking to probably move up another place or two. The film is based on the acclaimed coming-of-age novel by Kim Yeo-ryung and has had a monopoly on admissions for weeks now. "Punch" currently sits at 4,126,808 admissions.

Action time now with Jo Beom-goo's "Quick" at number six. This summer blockbuster dazzled crowds with well-timed humour, epic special effects, and hard-hitting action all the way. The film might no be as deep or contemplative as some of the other films on this list but the summer crowds needed something to quench their entertainment thirst and "Quick" delivered. "Quick" earned the interest of 3,129,251 moviegoers during its run at the theatres this year.

Jang Hoon's "The Front Line" has been selected as Korea's selection for the Academy Awards under the foreign film section. While some are not entirely pleased with this choice, the film does shine in a number of areas as it sympathetically reframes the North/South conflict from the perspective of the men on the ground. "The Front Line" has 2,949,198 admissions to its name as well as the opportunity to remind the world of "The Forgotten War" and the impact it had on the people who fought in it.

At number eight is Korea's comedic version of Romeo and Juliet in "Clash of the Families". The film playson a number of prejudices that exist within Korean culture. In this film regionalism gets in the way of a young couple's chance at love and happiness. This type of comedic might not be total appreciated by the international community as a lot of the humour itself plays off of the different region's dialects as well as the stereotypes the exists within them. Still "Clash of the Families" was a fun ride that started everyone's year with a few laughs and a light theme to digest.

Sohn Young-sung's "The Client" never really threw its weight around during its run in theatres but it remained a consistent winner supported by constant flow of moviegoers. This courthouse thriller earned 2,395,814 admissions and stars Ha Jung-woo, Park Hee-soon, and Jang Hyuk.

Lastly, the fourth film in the "Marrying the Mafia" comedy series had 2,370,075 tickets sold during its time on the big screen. Directed by Jeong Tae-won and starring veteran Korean actress Kim Soo-mi, "Marrying the Mafia IV – Family Ordeal" was more of the same great formula the series does so well.