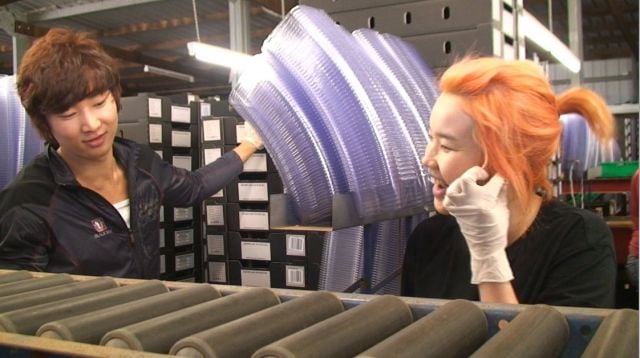 International travel is the hip new trend among young people these days. I should know- I'm writing this review in the lounge of a Seoul guest house. The lobby computer homepage includes links to housing and employment listings geared toward long-term visitors. South Koreans too can have similar motives when they travel. In "Holy Working Day", writer/director Lee Hee-won-I goes to Australia and, finding a lack of options in Sydney, tries to find work in The Outback. And perhaps something more.

What that "something more" might actually be is never really satisfactorily explained. Neither Lee Hee-won-I nor her traveling companions seem to have any clear goal save for not going back to South Korea. While every so often their lives are generically enjoyable, it's often difficult to escape the feeling that they never actually do anything except learn basic harvest methods. They search for meaning in simultaneous work and travel, yet only discover mundaneity that also exists in their own home country.

Consider this. Most modernized countries face a demographic crisis when it comes to the farming industry. Natives don't want to do the work, so foreigners are imported to do it instead. South Korea is no different in this regard, which is what make Lee Hee-won-I's willingness to do another country's farming work so deeply ironic. Lee Hee-won-I's thinking is that simply by being in another country, her work is able to transcend being a mere paycheck and offer some sort of spiritual fulfillment.

It's not an idea that makes very much logical sense, which creates more irony since Lee Hee-won-I clearly put a lot of thought into this experiment. She did a great deal of research locating opportunities even local Australians are not aware of. I have no idea what the working idea behind "Holy Working Day" was in the editing process, but almost all of the actual footage in the documentary was obviously taken by a younger Lee Hee-won-I with a somewhat naïve life philosophy.

Ideals that are, as strange as this may seem, universal. This is not because the themes themselves are universalist but rather that Lee Hee-won-I's experiences represent a disaffected class issue that affects pretty much everyone in developed countries. It's odd taking a look at Lee Hee-won-I's international cohorts who clearly share her desires and limitations, then realizing that in many ways Lee Hee-won-I ran away from South Korea to find exactly these kinds of like-minded people.

That's the general sentiment which pervades "Holy Working Day" right through to the title. Through work, Lee Hee-won-I seeks fulfillment, and having come to believe her own native opportunities may have undesirable limitations, hopes that somewhere else, anywhere else, may offer another part. Hee-won-I fails in this quest for emotional reasons as much as any other. Obviously she had to leave Australia in order to make this documentary in the first place. Does becoming a filmmaker count as "success" in a new kind of dream, though, since she did find that escape in the end? I'm not sure. And I doubt Lee Hee-won-I knows either.