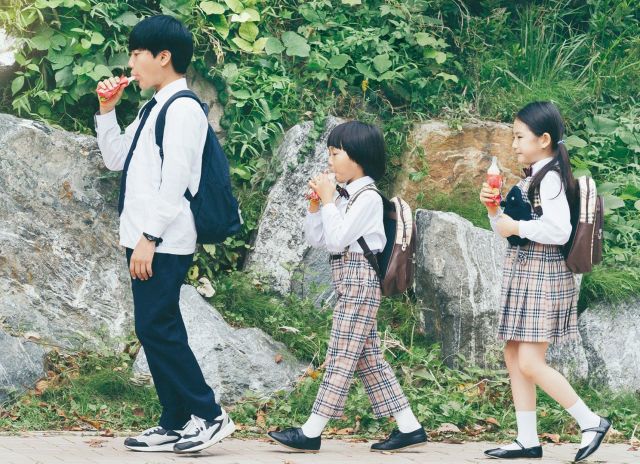 Joon-ho (played by Lee Hyo-je) is a middle school student with a lot of problems that aren't his fault. Joon-ho loves soccer, but is bullied mercilessly when he underperforms- and whenever another excuse is handy. Joon-ho's mom Seon-mi (played by Kang Yeon-jeong) is always home late from work, having had a bit too much to drink and their apartment is falling apart. The main bright spot in Joon-ho's life is his adorable younger brother Seong-ho (played by Im Tae-poong) who is indirectly the source of much of this misery.

The situation is never spelled out explicitly, but "Home" gives us plenty of context. Seon-mi had an affair with Won-jae (played by Heo Joon-seok), resulting in the creation of Seong-ho and the destruction of her marriage. Won-jae's marriage survived, and we can see from Joon-ho's sheer shock at seeing Won-jae's daughter Ji-yeong (played by Kim Ha-na) and eventually their home that the impulsive, stupid actions of adults have robbed Joon-ho of a chance at a true home.

Not that Joon-ho is bitter. Far from it, Joon-ho is extremely eager to please. Won-jae is the only mature parental figure Joon-ho has ever had in his life, and he's desperate to hold on to that. Of course, most of Joon-ho's actual happiness comes from taking care of Seong-ho and Ji-yeong and feeling responsibility for them. "Home" is loaded with tender heartwarming moments of all three of them just spending time together as a single unit. This love and joy brings Joon-ho optimism.

The problem is, we know the truth. Won-jae may seem like a nice enough guy, but he still cheated on his wife Mi-jin (played by Choi Yoo-song). What's more, Mi-jin is going to be unhappy enough about Seong-ho living in her home. Joon-ho isn't even a real relative. And ultimately, there are limits to how far Won-jae is willing to go to accomodate Joon-ho. Obviously accomodating Joon-ho is the right thing to do, and Won-jae clearly feels massive guilt about all the damage his actions have caused and yet...adults are all too imperfect.

Joon-ho just doesn't understand that. He spends most of "Home" convinced that all he has to do is work hard and be caring and loving and attentive and somehow all of his problems will work themselves out. That's just not how life works. A single moment's mistake can have massive repercussions. A single awkward bureaucratic requirement is enough to kill any ad hoc arrangement. Noble pain is not karmically rewarded with spiritual bliss just because life is fair.

Director Kim Jong-woo constantly warns us that "Home" is a film in the realist mode, and that we're not going to get an uplifting happy ending simply because that's what Joon-ho deserves. That's what makes the ending so unaccountably brutal. Joon-ho is completely powerless to find a place where he belongs, and has to make do with the best he has. Ten or twenty years later, who knows where Joon-ho's life will lead? Maybe he'll find a "Home" somewhere else. Or perhaps, this may just be the beginning of a yet longer tragedy.